What would be classed as Salmon fishing dreams? Salmon Fishing in Scotland? Four Salmon in one day? Absolutely!
In Autumn/Fall in Scotland it’s not unheard of to experience four seasons in one day, but four Salmon in one day? To one angler? It’s almost unheard of in the modern day.
So yes, this was in-fact a scenario that happened to one very fortunate angler fishing with Scotia on the mighty River Tay back in October 2015!

Bill and Allan had driven all the way down from Inverness to come Salmon fishing on the Tay with Head Guide Callum Conner. We manoeuvred their initial date to capitalise on some last minute availability on one of my favourite Salmon beats and one of the most productive on the river. After a long drive, some motivational speech from myself then probably more importantly some caffeine, Bill & Allan and were raring to go!

I gave a quick tackle demo and briefing of where the Salmon would likely lie in this area. Bill and Allan had a few casts while we waited for the ghillie to drop off the other rods on the opposite bank. After half a dozen casts I see Bill with his rod high and arched over, yep, Bill was in… 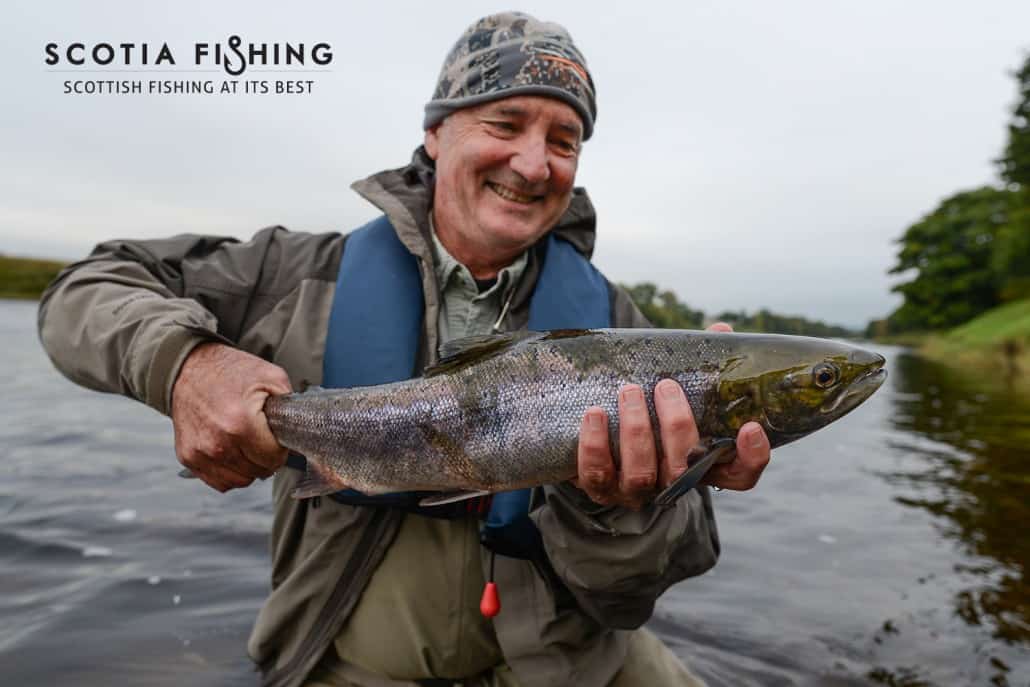 Bill’s first ever Atlantic Salmon, the best way to start a day! But that hat though Bill?

After a short fight he’d landed his first ever Atlantic Salmon. It wasn’t the bonniest of Salmon, it had been through the wars but still, it’s a Salmon and he was off the mark! I knew after this Bill’s confidence would be sky high for the remainder of the day and I had a feeling it wasn’t going to be his only today!

Now, the Lower Tay is a big river, even in summer lows which we were experiencing on this day. Sometimes you need to cover the pools from the boat to ensure you fish as much of the river as possible and ultimately heighten your chances of success. So off we went. Anchoring up in one of the most productive back-end Salmon pools of the lower river we had Salmon of all shades and sizes jumping around the boat! This has to be seen to be believed, the Lower River Tay can come alive with Salmon at this time of year. You would be lucky if thirty seconds would pass without a Salmon belly flopping back into the water. For someone that hasn’t experienced this it really helps to get the adrenaline flowing! 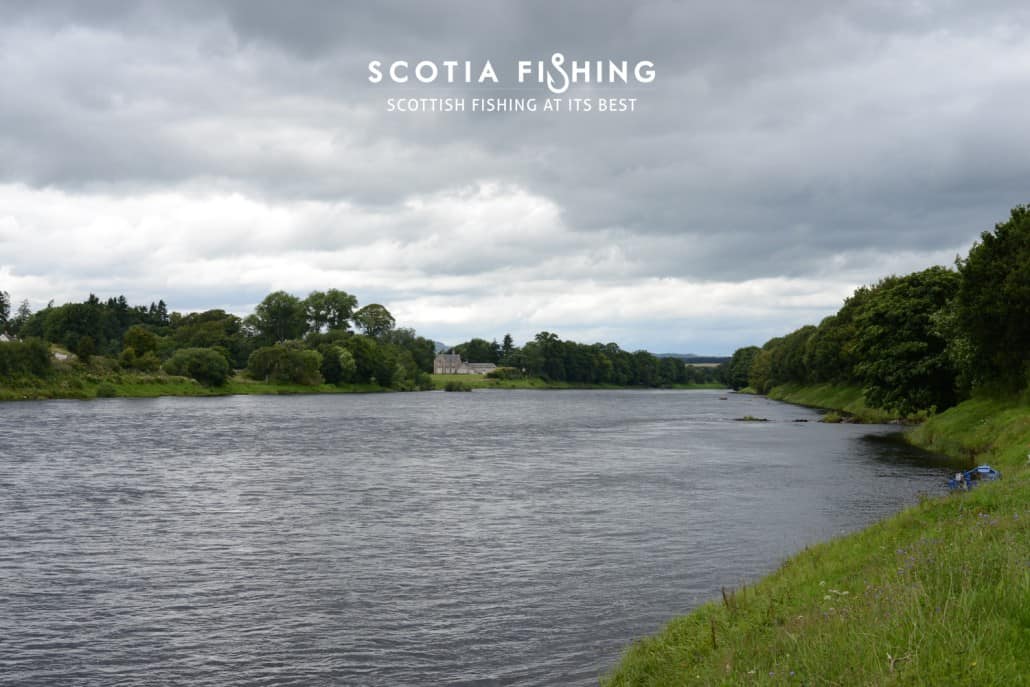 Bill and Allan continued to cover the water well. Every now and then Bill would murmur a few “ooh” & “ahh, that was a hit”. After an hour one finally committed. With the drag from the reel producing some lovely music to our ears we knew we were into something more substantial than the first fish. Carefully edging the boat into the side whilst playing the fish would help us land and photograph the fish, causing the least amount of stress possible.

I had the pleasure of slipping the net under this awesome back-end Hen Salmon, sporting full spawning livery. Unhooking the fish in the net, in the water and after a quick photo she was released back to do her business. We can look forward to meeting her kids in a few years time!

A thumper for Bill’s second of the day!

While we were on the bank we thought it would be as good a time as any to go cover the top of the beat, which had been left alone by the other anglers all morning so any likely Salmon lying there had not been disturbed yet. With the top run looking very promising I stuck Allan in front of Bill aka “hot rod” to try get him into the fish first. Before I could even wade back out I hear “fish on Cal”. Yup, you guessed it, he’s in again – haha. A few choice words were aired in good jest at Bill as I made my way back to do the honours for him.

This was a sparkling bright sea liced cock Grilse of around 6 pounds that gave a spirited fight with many nerve wracking, head shaking runs close to the net. A quick photograph and back he went! Big hand shakes and congratulations were voiced to Bill who had released his third Salmon before lunch – what a morning! 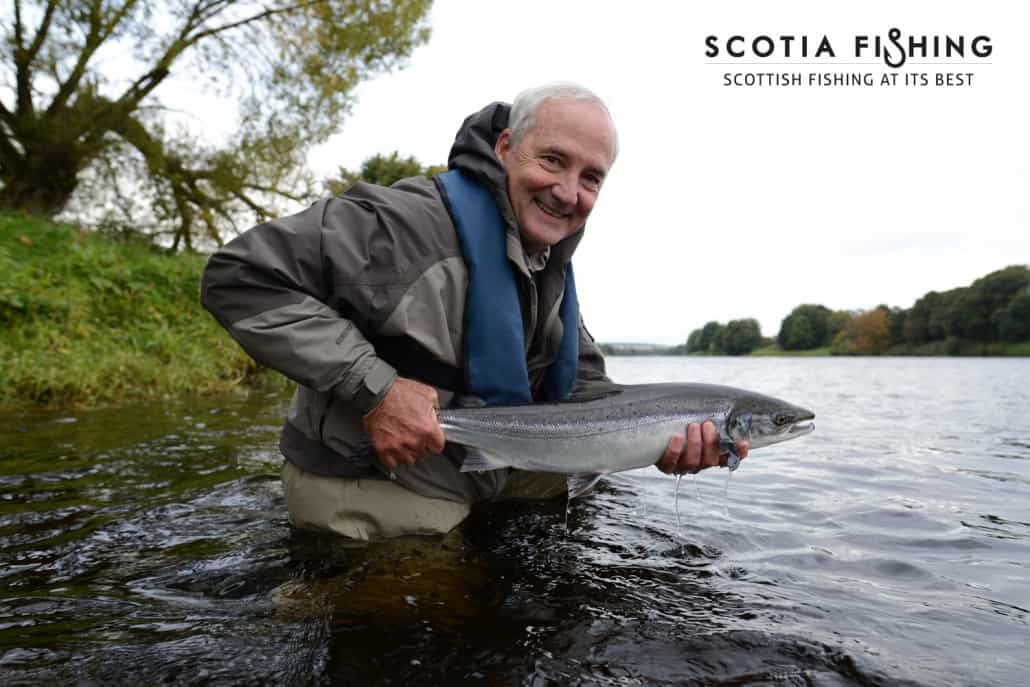 A beautiful third Salmon for Bill. This one with sea-lice straight from the ocean!

Three Salmon was the half time score and we retired to the hut for a welcome hearty Scottish themed lunch and a celebratory dram! A quick chat with the other anglers and it was soon apparent that Bill had been the only fortunate angler this morning despite the obscene amount of airborne Salmon seen throughout the beat!

The afternoon session would see us fishing the bottom section of the beat from the left bank. Again, I thought I’d put Bill down behind us in the hope Allan would cover any likely fish first before Hot Rod could work his magic! After a few minutes I had to remind Bill about wading too close to the lies. A quick briefing of the likely resting areas for a running fish on the inside seam of the run and a few casts later resulted in the fourth hook-up of the day.

Another great fight from this chunky little Salmon ( or Grilse – a  1 sea winter Salmon ) and once Bill subdued her I slipped the net under his epic fourth Salmon of the day! 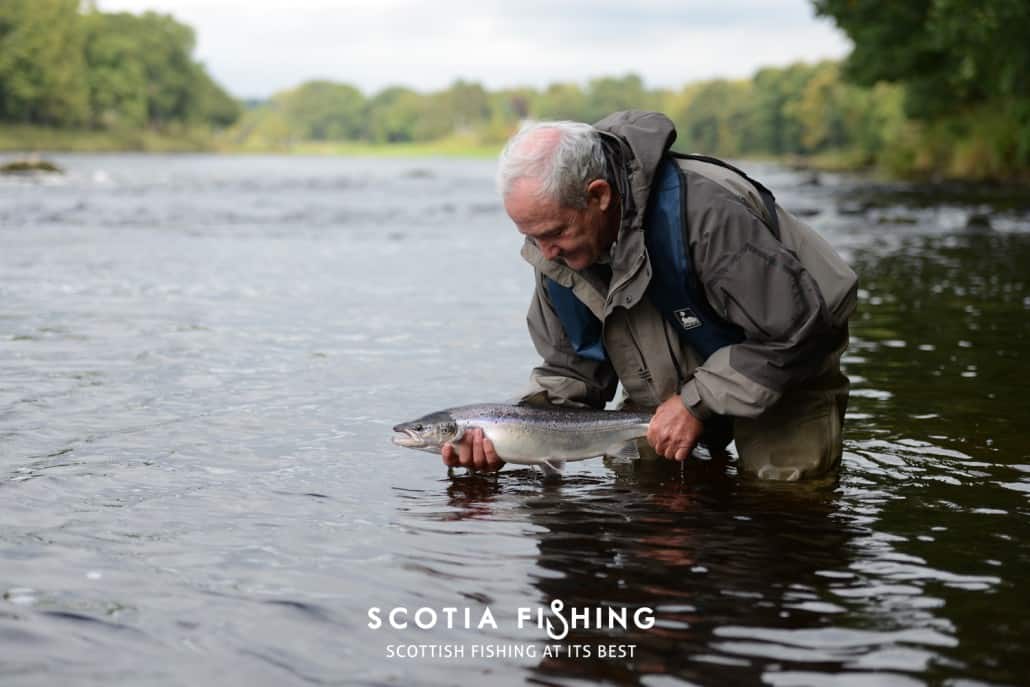 Another quick photograph and back she went. “Pretty easy this Salmon fishing Bill isn’t it?” I was delighted for Bill, he now owns the Scotia Fishing record for the most Salmon in one day – which is more than my personal record of three and last seasons best of three!

Fishing is funny, Allan had the exact same set up and fishing the same areas as Bill yet never touched anything? I felt for him and I think as anglers we’ve all been there before – sometimes you are just luckier than the others?

Thankfully Bill was better at fishing than he was at selecting his choice of headwear – which was atrocious Bill! 🙂 This became a running joke throughout the day with Bill taunting the other anglers asking if they would like to wear his “lucky” hat. 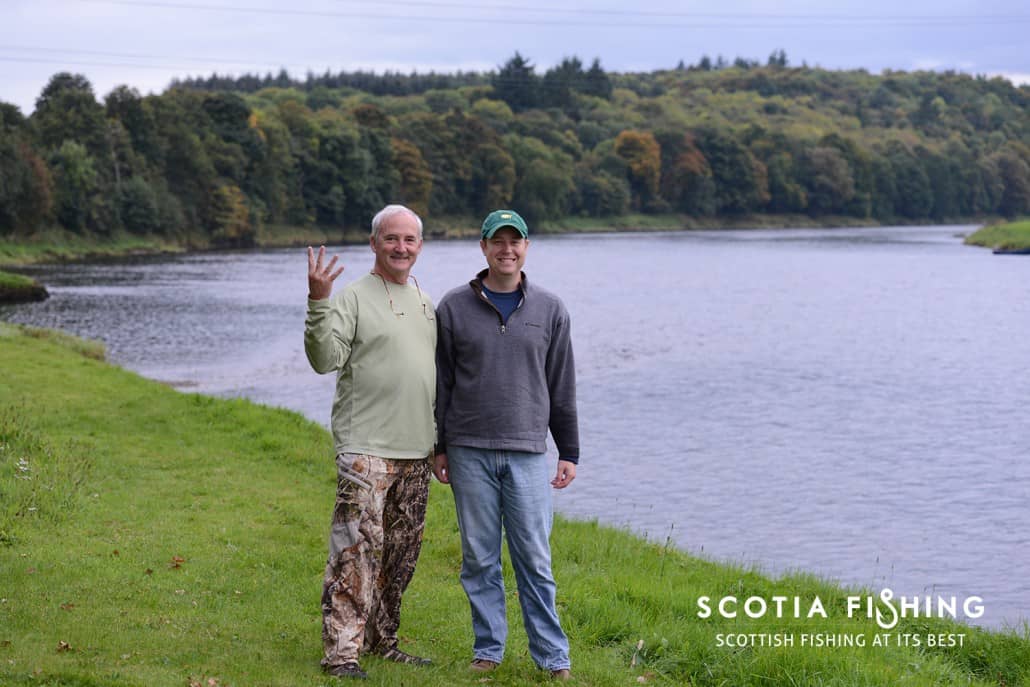 Hey son, did I tell you I caught four Salmon today?…

This was one of the most memorable trips from 2015 and I was over the moon for Bill, especially given the long commute endured to make this happen.

I emailed Bill recently to sum up him his day for me in a  few words, here was his response:

I spend a good bit of time fishing the coastal and inland waters of Georgia and South Carolina, primarily the Savannah to Charleston area. I’ve been waiting for years to fish Atlantic Salmon in Scotland and Callum Conner provided that opportunity. I caught 4 beautiful fish, 3 before lunch and 1 in the afternoon.

Callum provides the all-round best Salmon fishing experience! Perfect setting and the right equipment for us Americans to experience the Lower Tay. Callum is a congenial host and guide. Listen to him – he knows his fish! He knows his way around the kitchen too. The fish and potato stew was just right – hearty, simple and filling. It was a great way to spend a day fishing with my new son-in-law, since he learned that the ‘old man’ could still out fish him. We call him the son-in-awe now!

Big thanks to my good friend and Ghillie Harry Proud. Not to forget the Salmon gods!

The next client to beat this record will receive a fine bottle of single malt Scotch Whisky courtesy of Scotia Fishing!

For more info Salmon fishing dreams on the River Tay please visit our Salmon fishing in Scotland package or contact us now to enter our enquiry form.