We had a variety of fishing trips in Scotland during July. July was a hot month, we experienced 30 degree temperatures on a number of days, with some fisheries recording water temperatures over 20 degrees – not great for Salmonoid species such as Trout and Salmon. That didn’t stop us from landing some special fish, particularly towards the beginning of July. 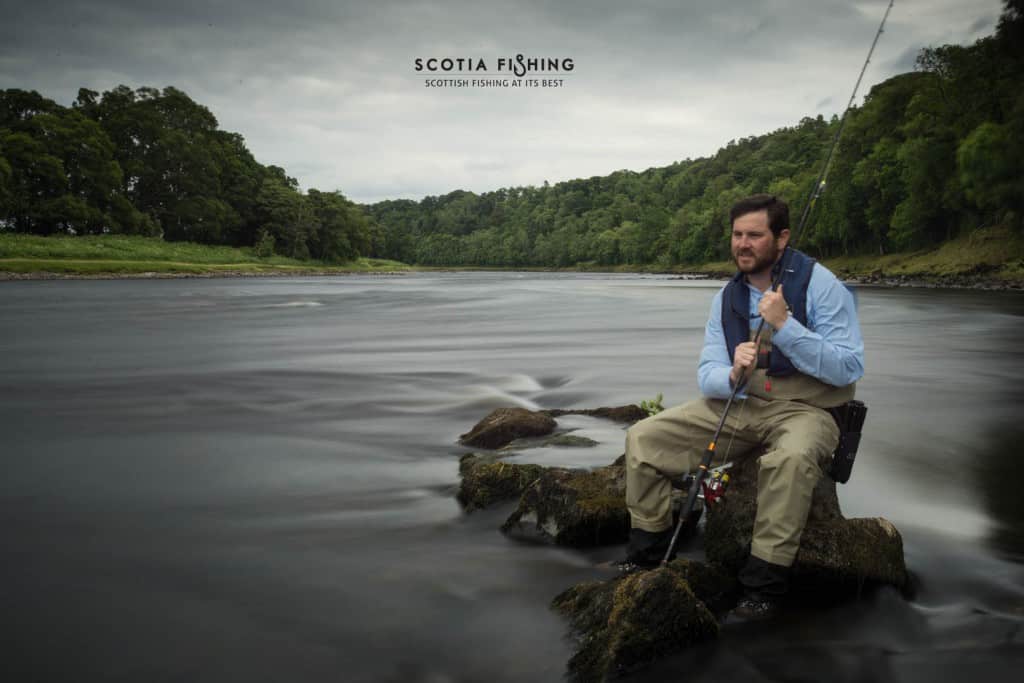 Dan enjoys the downstream view on the River Tay

Daniel was out Salmon fishing on the river Tay in low conditions and although we didn’t manage any Salmon, we had a great day and Daniel learnt to Spey cast using top of the range rods from Loop. He worked hard and deserved a Salmon for his efforts – maybe next time Dan! 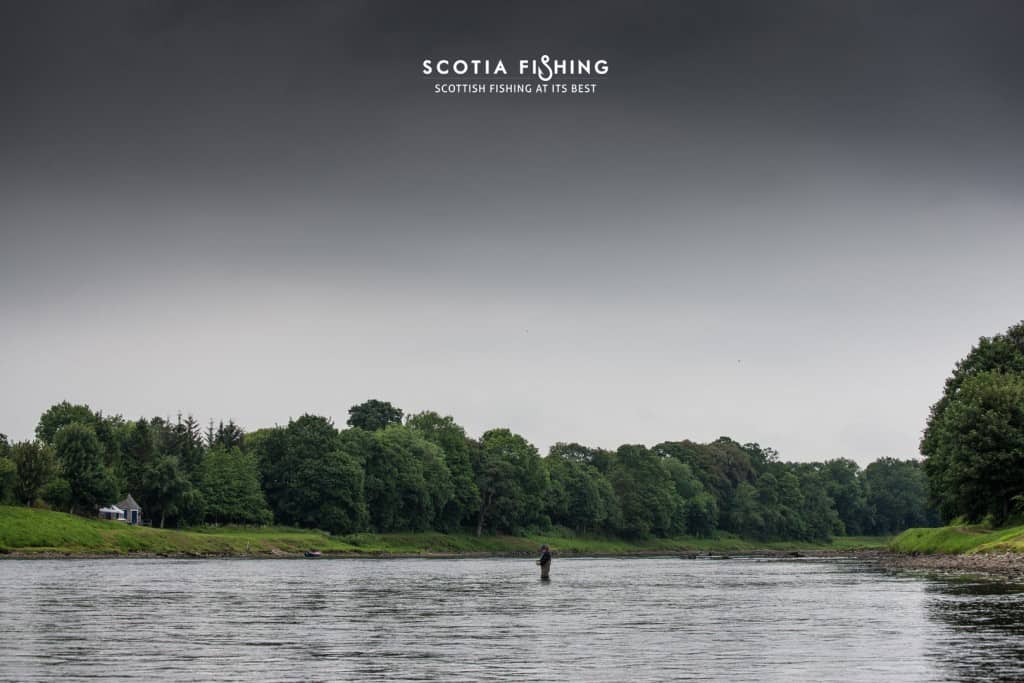 I had the pleasure of looking after Greg for three fishing trips in Scotland, we decided to do a day of Salmon, Pike and Trout. The first day we fished for Salmon and Greg was fully aware the conditions were going to be tough but it’s not often you get the chance to fish for Salmon in Scotland – the home of Salmon fly fishing! He plodded on but could not connect with one of natures finest creatures! 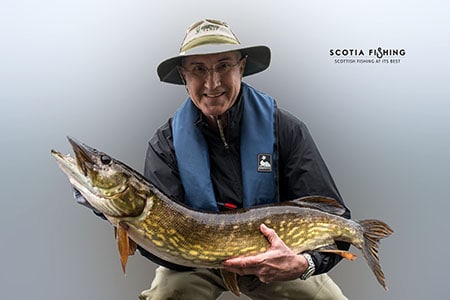 Next day saw Greg on our guided Pike fishing trips in Scotland! Greg had to be talked into Pike, it’s not often a fish associated with Scotland but we have some outstanding Pike fishing in Scotland. We didn’t have to wait long, Greg had literally only been fishing 5 minutes and we connected with the new Scotia Fishing big fish record – a 22lb Pike! 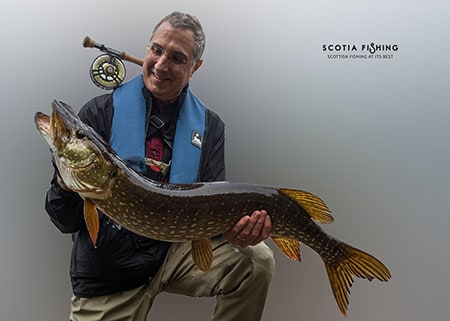 Not long after he managed this stunner weight 16lbs on the fly using one of Callum’s own tied Pike flies on the Loop Cross S1 9ft #9 fly rod. Greg followed this with another 5 smaller jack Pike to 6lbs – a great day by anyone’s standards. Next up was Trout and we fished one of our favourite brown trout lochs. We managed half a dozen or so Wild Brown Trout to 3/4lb, the average wild stamp of fish. 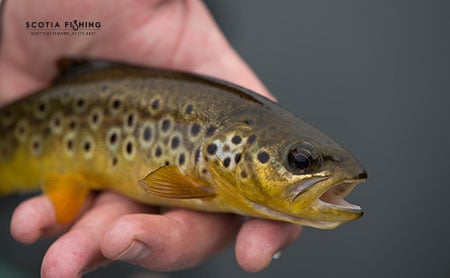 Greg remarked how much he enjoyed the variety of the three days and really enjoyed his fishing trips in Scotland with Scotia Fishing!

With the fishing hard on our local Brown Trout water and little Salmon activity we took South African father and Son on a guided trout fishing trip in Edinburgh to a reservoir that offers great sport for Rainbow Trout on dry flies. Here’s a little video I took with talented young angler Rhu catching and releasing a lovely Rainbow Trout on a daddy long legs! 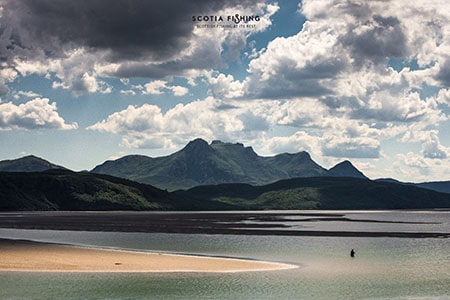 Yes, this is Scotland!

Callum headed up to the far north of Scotland to look after a group of German anglers with fly fish dreamer’s head guide Wes. Weather wise it was perfect, you couldn’t have asked for better weather to see this beautiful part of our country but for Trout fishing it was far from ideal to be honest. We had temperatures up to 29 degrees with not a cloud to be seen for four days! 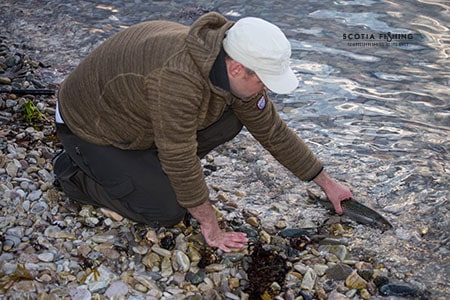 With this in mind we turned our attention to fishing in the sea. The group managed to get some lovely Sea Trout and Mackerel which became a staple part of our diet over the four days, freshly cooked by the water, delicious – you can’t get any fresher than that! 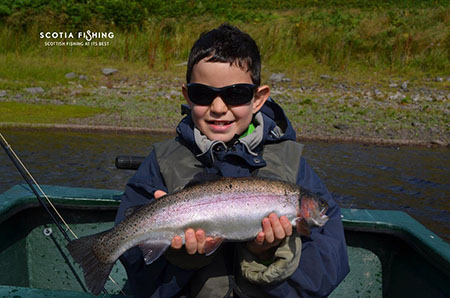 A whopper for young Alexander on his first ever outing fly fishing!

We also managed to introduce three newcomers to the wonderful sport of fly fishing this month! Lennie was looking after father and son from Dubai Alex and Anas. After some tuition from our guide Lennie, a qualified SGAIC casting instructor, Alex managed to catch three hard fighting rainbow trout fishing buzzers on a floating line – out fishing his father I may add! Father & Son fishing trips in Scotland. 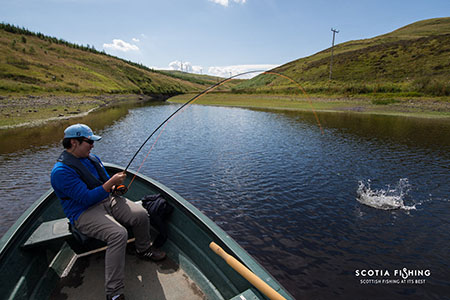 Fish on for Wu!

Sang and Wu all the way from Korea managed to connect with a few rainbow’s too after some qualified instruction from head guide and Loop Akademi member Callum. They done very well considering the conditions, with Wu releasing a lovely 4 pounder on the fly! Looking forward to taking the guys Salmon fishing later this year. 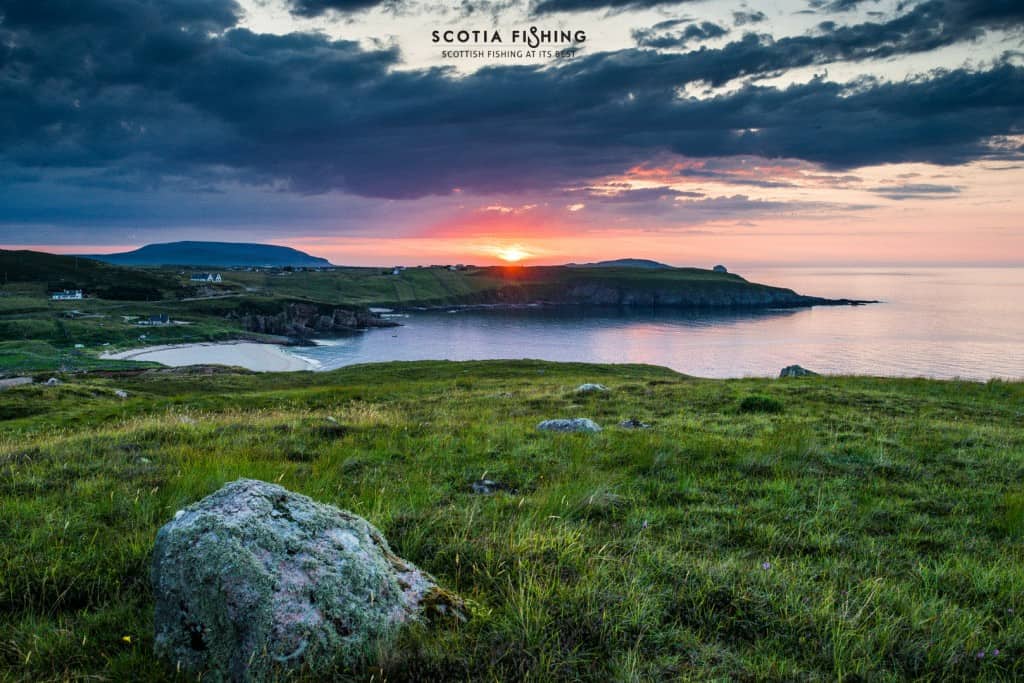 The sun sets in the beautiful highlands of Scotland!

August has got of to a flyer with one lucky client landing three Salmon on the river Tay. With some much needed rain arriving we expect the Salmon fishing to really start picking up from now into September, especially now with the grilse (1 sea winter Salmon) are finally arriving in numbers. We still have some availability for the rest of the August and September so if you fancy a days guided fishing in Scotland please get in touch by pressing the “EMAIL US” box at the top of the site.

Stay tuned for our August round up of our guided fishing trips in Scotland with Scotia Fishing.

Salmon Fishing on the River Tay in Scotland

Fishing in Scotland – June Round Up Fly Fishing in Perth Scotland UK
Scroll to top
This website uses cookies to improve your experience. We'll assume you're ok with this, but you can opt-out if you wish using your browsers settings. ACCEPT Read More
Privacy & Cookies Policy