What better way to end April than to have a round up of our guided trips fishing in Scotland! April has been a funny month, still cold, lots of easterly winds, a couple of 15+ degree days and even some hailstones to throw in! Spring fishing in Scotland is always a funny affair, the old quote of “four seasons in one day” can be very true! Needless to say, the unsettled conditions have made fishing very hit and miss, although we have managed some cracking fish! So let me give you the low down on our personal and guided fishing trips in Scotland with the Scotia Fishing team.

Early April saw me (Callum Conner, owner and head guide) finally manage to get out for Salmon on the mighty River Tay! Conditions weren’t favourable, low water and not a single sign of any fish activity. The fly would have fished well but I opted to use the spinning rod and set up with a Megabass Vision Oneten on a Sakura Shinjin 8’6″ 15-50g lure rod. The reason being I could move about and cover more water than I would fly fishing (this is my main philosophy in fishing, cover the water). I found a nice deep pool with a little bit of flow in it and as I came to the end I connected with this, the only fish of the day and a cracking 12lb Spring Salmon – first of 2014 on the first trip, get in! 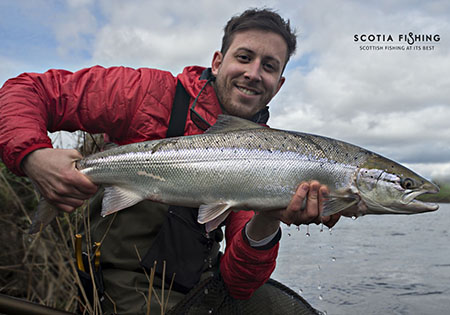 Next trip so me out with my good friend and one of Scotland’s most well known LRF enthusiasts Jake Schogler! For those unaware, LRF is an abbreviation for “Light Rock Fishing”. LRF is an ultralight lure fishing style developed for sea fishing but crosses over between fresh and saltwater. It’s not everyone’s cup of tea but I think it’s a really exciting method of fishing and I take pride in having helped grow awareness for the Light Rock Fishing in Scotland along with Jake etc. I’m not going to lie, conditions were terribly cold. Jake managed to snare a small flounder out of Dunbar Harbour before we moved further south to avoid the strengthening winds. Settling in on the new harbour we started to fish the river mouth and had awesome sport using light metals catching masses of small Sea Trout or “Finnock” as they are often referred to! 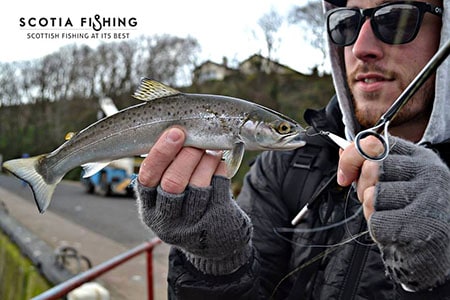 The following week I was down to Kelso to meet Eoin Fairgrieve and Gordon Sim (Loop Tackle MD). The morning saw me out with Eoin casting while he took some images of me for the new Loop website Akademi section. I managed to get a sneaky hour of Grayling fishing in whilst he took a fly fishing lesson and had one of the most productive sessions I’ve ever had! I must of landed into double figures of Grayling with the first four being over or around the 2lb mark – outstanding Grayling fishing in Scotland by anyone’s standards! 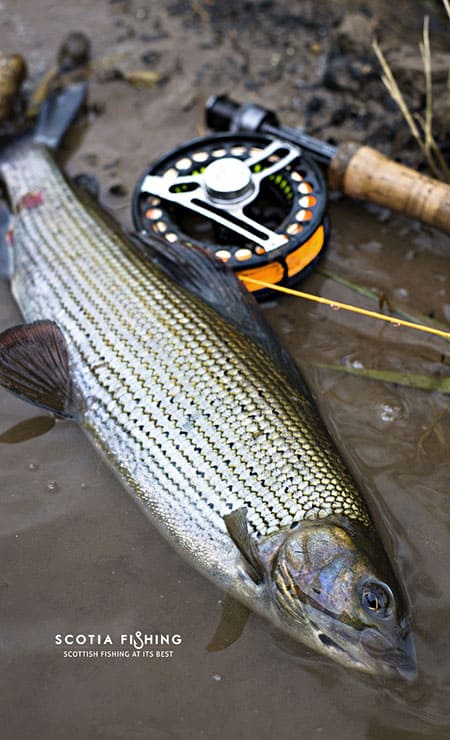 The first guiding job in April saw us out with 3 lads from Peterhead or “Peterheed” as it is often pronounced locally in Scotland! Staying in Crieff and with the weather still cold it was decided that Rainbow Trout fishing would offer the best sport and a trip to Loch Frandy was arranged. Like most good guides Lennie (Scotia Fishing Guide) and I had a four hour session on the Loch two days before to suss out tactics and areas the fish were holding. One of the guys (Kevin) was a regular angler so upon getting set up Lennie took Kevin out straight away whilst I gave Dave an introduction and Robert a we refresher if you like. After about 15-20 minutes I was happy enough to get the boys out fishing. We headed for the Northerly shore and it wasn’t long before we had the first fish hooked fishing mini competition size cats and damsels. 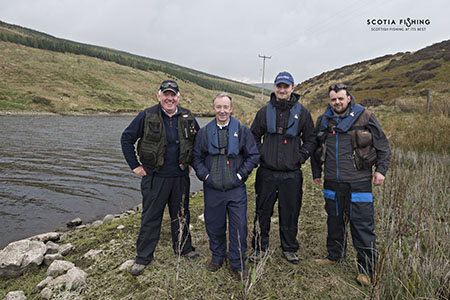 Robert was first to hook up and it wasn’t long before he had another! Kevin was with Lennie and managed to land two Rainbow Trout and lost a handful of fish also. Robert ended up with 3 to become top of rod for the day but the best moment was seeing Doctor David with his first ever Trout which gave him a right old tear up!
A thoroughly enjoyable day with great company – what fishing in Scotland is all about! 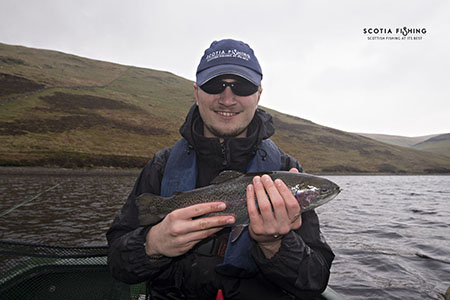 The Doctor with his first ever fish!

Next trip saw me out for Salmon with my French guest “Will”. Will was employed by the French National Fishing Organisation and had some interesting stories to tell about how they organise fishing in France. His dream is to catch an Atlantic Salmon (no pressure on me then), we decided to hit the upper reaches of the Tay as it offered an economical option and a good chance of a Spring Salmon. Will fished hard all day and managed one follow from a Salmon closely followed by a Brown Trout weighing 3lb which took a Vision Oneten lure! Regardless of whether it was intended or not it was a great capture and a great way to end Will’s day fishing in Scotland! 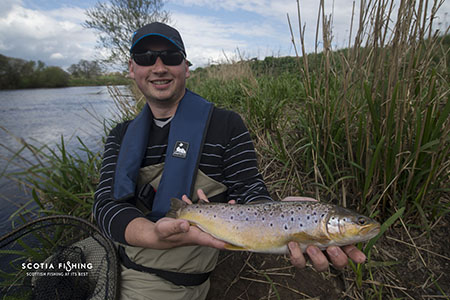 A fine wild Brown Trout from the River Tay

The next trip saw us out with the Connolly family from Peebles! They were looking to take their 82 year old wheelchair bound grandfather out again after an absence from fly fishing for at least three years. It was an absolute pleasure to see him pick up the fly rod and cast (better than the majority of stillwater anglers these days I may add) like a natural – stay tuned for the short clip! He even managed to catch a nice Rainbow Trout on a buzzer and the family had around seven fish between them all on buzzers. Look forward to taking them out again for a Salmon fishing in Scotland trip! 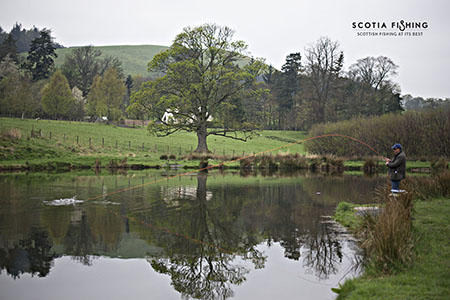 Fish on for Billy!

Last job in April saw me guiding for local lad Stuart, he decided he’d like to try some Pike or Pollock fly fishing.  With it only being April I advised Pollock fishing wouldn’t be at its best so we opted to try fly fishing for Pike. I set Stuart up with the Loop Cross S1 9ft #9 fly rod ( what a piece of kit this is, and no bias – ask Stuart! ). Stuart fished hard all day and it was a shame he wasn’t rewarded with his first Pike on the fly for his efforts! First skunk of the year for us but Scottish Trout water Pike fishing can be like this unfortunately! Stuart had a great time and learned a few things about how to target Pike on the fly. We look forward to guiding Stuart again in the summer for Pollock on the fly. 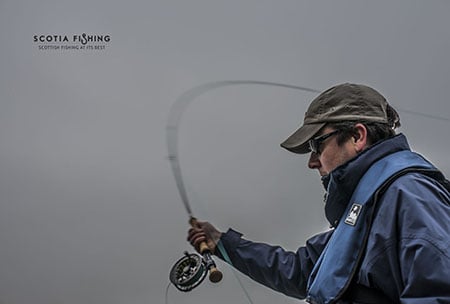 I met up with a fellow casting instructor and photography geek Al Pyke. We spoke about meeting up for a fish and photo session in the Highlands of Scotland to take some images of each other for our websites. We had a little fish for the resident Wild Brown Trout managing a few between us but spent more time posing for the cameras! I had this image in my head for the past six months and was delighted when we finally stumbled across the area. 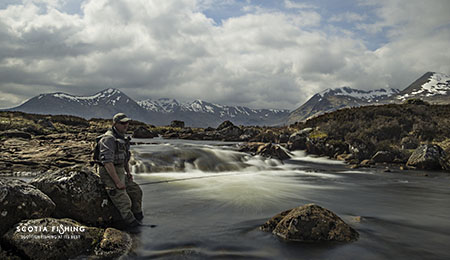 Gods country – is there a more beautiful place to cast a line?

Stay tuned for our next post we will be adding a new limited duration fly fishing package. This will be available at a fantastic price!

Looking forward to May, temperatures should now be picking up and we can expect Trout fishing to pick up as the hatches increase. The sea temperatures are increasing and I see there has been Tope caught at our favourite sea fishing locations already! We have some interesting jobs coming up!

Please get in touch if you’d like to know more about our services or to book a trip;

Tight lines in May to everyone fishing in Scotland!

Loop Pro Team Scotland – Callum Conner Fly Fishing Near Glasgow
Scroll to top
This website uses cookies to improve your experience. We'll assume you're ok with this, but you can opt-out if you wish using your browsers settings. ACCEPT Read More
Privacy & Cookies Policy