The 2018 Scottish Fishing Season is now over. So firstly I’d like to wish happy new year to all our readers, past clients and future clients fishing with us in 2019.

2018 was a very strange year fishing wise. It was a long winter with as much snow as I can ever remember in my lifetime in and around the Edinburgh area. There is something special about fishing in the snow I must admit. But as a travelling angler we can fully appreciate that, although you don’t come here for the weather, you don’t really want to be out fishing in the snow! 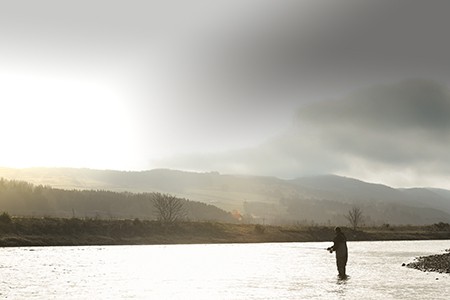 Spring decided to make an appearance in Mid April it literally went from snowing to temps in the mid-teens over night. T-Shirt weather we call that here in Scotland! We then had months with very little rain which kept the rivers at an all-time low for most of the season from May – late September. That was eventually when we saw a reasonable rise in river levels. The water didn’t last and any left we got was away in almost away again 24 hours on the Tweed.

This cold start certainly affected the fishing with the Trout never really rising until later in April. On a whole the Trout dry fly fishing wasn’t anywhere near as good as the previous year, without doubt due to the weather. May saw some good steady hatches and we had numerous shots at trophy Brown Trout but not many managed to grace our net. They don’t get big being silly that’s for sure!

That said we did manage a few respectable leviathans! 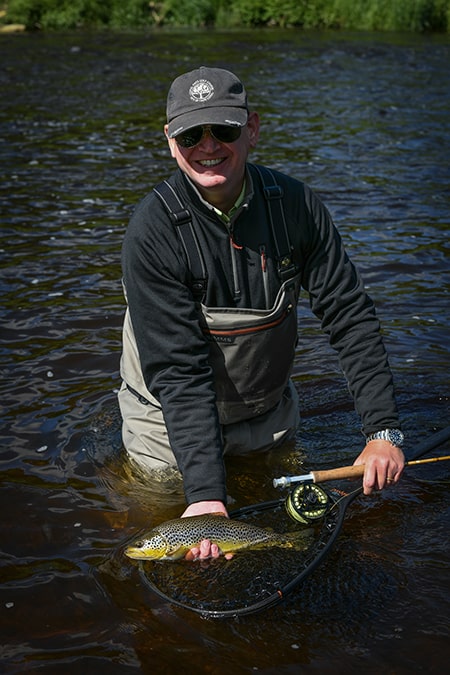 Stefan with a respectable Trout – look at those colours! 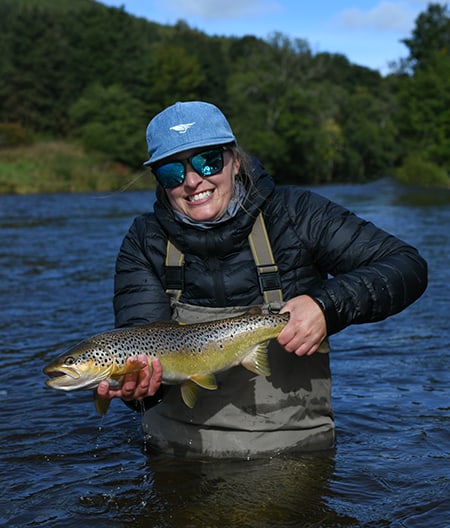 Our Pike fishing season was consistent with reasonable results most days and almost zero blanks. No real monsters but we managed fish to mid-high doubles on both the fly and lures. Winter dead-baiting normally throws up a few of the big girls but no such luck this winter season. One thing we did notice was a slight change in their behaviours this season on our usual loch, with the fish changing where they normally like to feed. I think this was a result of the long winter keeping the smaller stickle backs and minnows in deeper water and entering the shallows until summer.

One of the seasons pike highlights was our Canadian client that landed this Pike on a popper with one of the most aggressive takes from nowhere I have ever seen! Amazing fun! 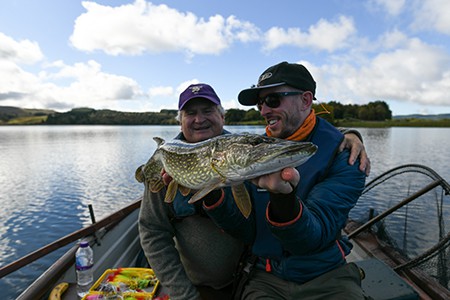 What do they say about bananas in the boats?

And this gentleman was on the receiving end of a hard time from this angry Pike which took a Sakura bait fished over the top of a weed bed hotspot. 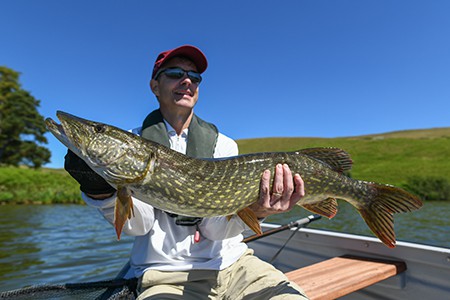 This Pike led Paul on a merry dance around the boat!

The 2018 Salmon fishing season in Scotland will not be remembered as a good one on a whole that is for certain.  The extended drought put water temps sky high and oxygen levels low. The river level on the Tweed and Tay is the lowest I have ever seen it in my life and the lowest ever on the records. This kept the Salmon in the estuaries for longer and very few were running the rivers – particularly the spate rivers.

That being said, we had our best year ever for Salmon catches for our clients! 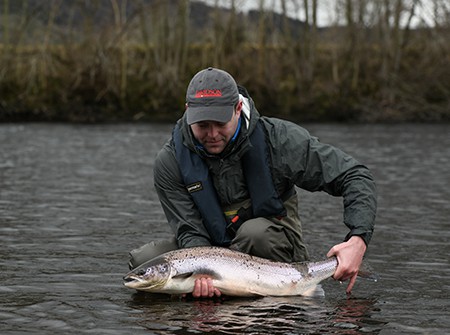 Luke with the first of our season!

With our first spring Salmon landed in March we managed to tick away with fish every month despite the incredibly tough conditions. Why? I can only put this down to good luck and praying to the Salmon gods on a daily basis! 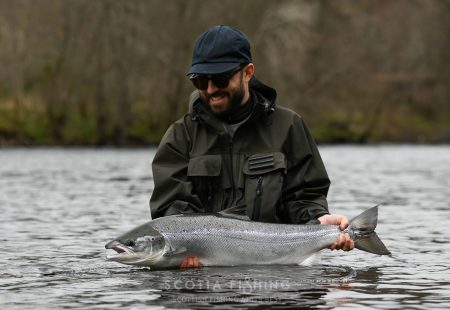 As perfect as they come!

One of the spring season highlights was returning client Mr Weil aka “lefty” with an absolutely pristine fresh 16 1/2lb Atlantic! A bar of silver!

We also managed to break one of our ducks with woman Salmon anglers. Ingrid managed to land her biggest ever Atlantic Salmon on the River Tay fishing the fly under the guidance of Callum Conner. 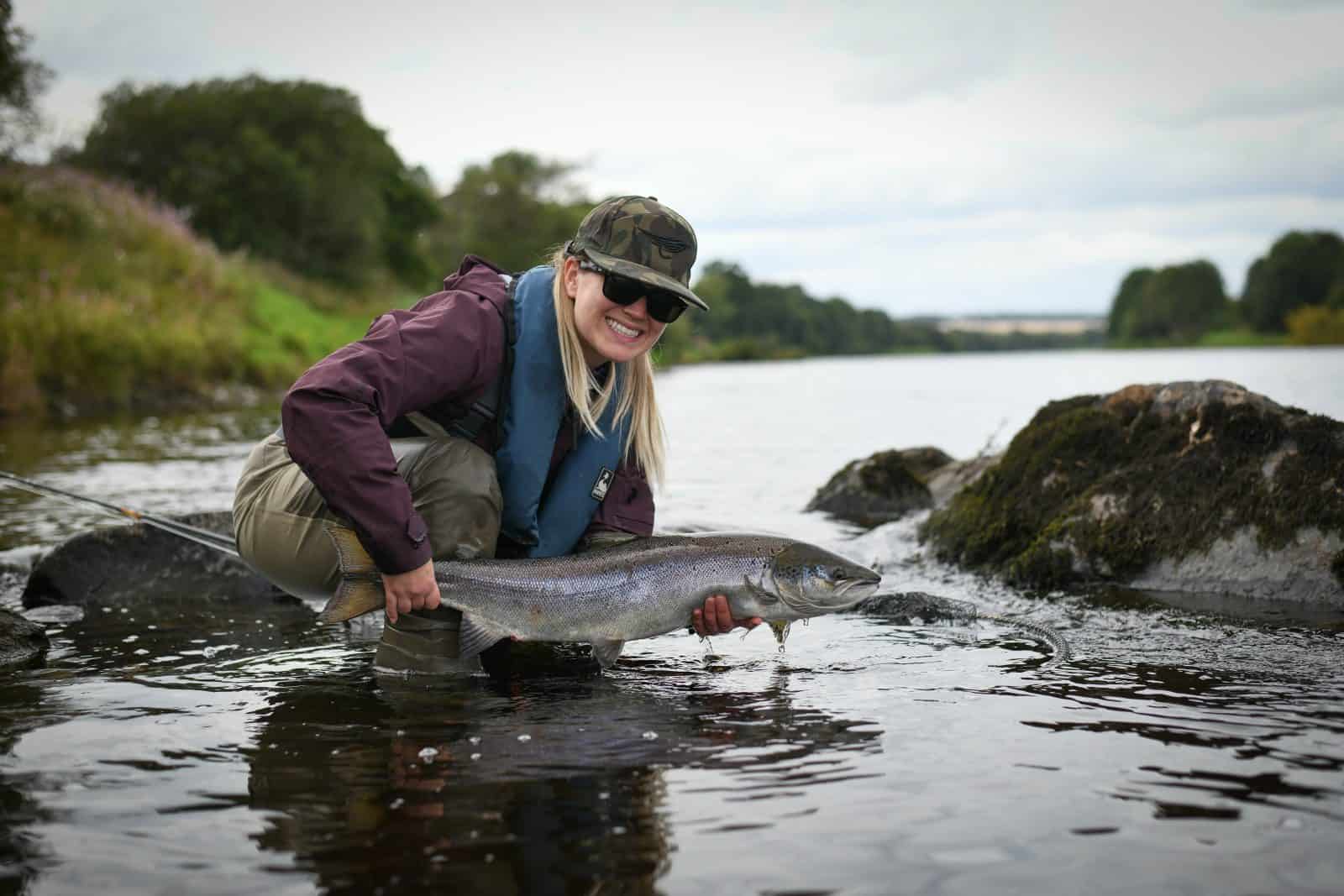 And another record breaking day was fishing with the Swedish legend – Magnus!  I have to type and tell you this long story of an incredible two days of Salmon fishing we had on the Tay and Tweed.

Day 1:  Magnus was fishing on the Middle Tay on one of thee nicest fly fishing pools and one of my favourites, the “Castle Pool” at Upper Islamouth. A beautiful wad with gravel bottom and steady flow which tails of into a v section with a few boulders just screaming out Salmon lies! 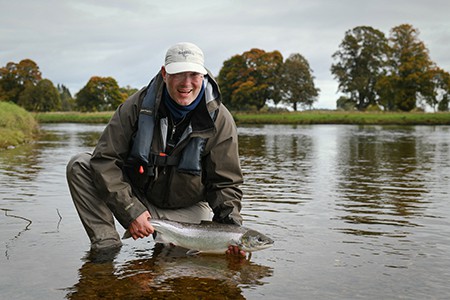 Thankfully number three made it to the net!

Magnus went through the Pool twice in the morning hooking into three fish but only landing one, this pristine fresh fish above taken on a Red Frances after following my advice to change his fly.

After lunch we moved into the “Boxwood Bush” pool – another very productive pool that we’ve done well with clients in the past. Magnus fished down through the normal areas into the tail when the line tightened up – fish on!

This was on for a good few minutes before shaking the hook! A few casts later and we’re in again!

This one managed to stay on and we netted a this angry cock fish displaying full spawning tartan! 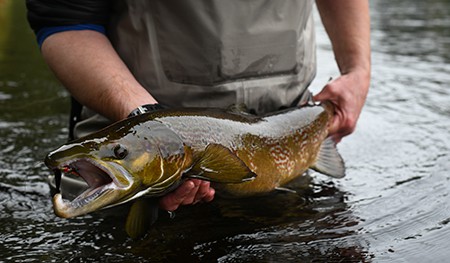 An old warrior on the Phatagorva!

Magnus then proceeded to hook another two fish but lost both! Frustrating but still, what an amazing day of action! Next up was the Tweed – could he continue his luck?

I was very open with Magnus about the chances today as the river was desperately low. We opted for single hand tactics and fished a small Sunray.

On walking to the top of the beat I noticed lots of clear gravel patches which to me indicated practice spawning redds. “There is definitely Salmon here my friend!”. 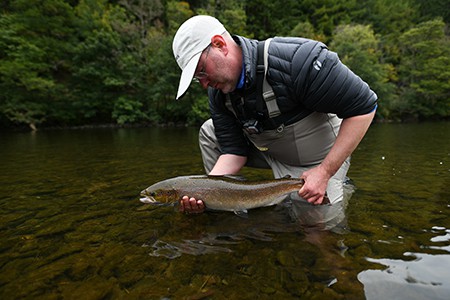 A nice coloured hen to start!

We decided to fish in this area after covering the top two pools with no success and needless to say the Swedish hot rod hooked his first Tweed Salmon sat just off the Croy on the opposite banking!

After lunch, we headed down to the bottom beat. Fishing my favourite pool here we set about with the Sunray with no action until I saw a fish head and tail – they’re here! We changed to the Red Frances and this managed to tempt two coloured fish including this Alpha Male in full spawning livery on the single hand rod – amazing fun! 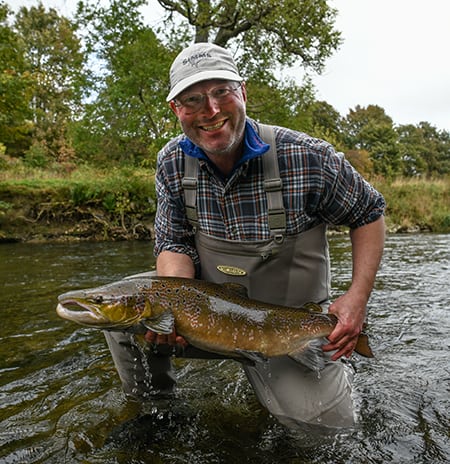 Magnus mentioned this was his best ever two days of fishing having fished for Salmon in Sweden and Norway and has never caught so many.
Even more satisfying  – his wife bought him this trip for his Birthday. These are the kind of touching moments you can experience as a guide and why we do it!

The biggest Salmon of the season went to a complete newcomer to the sport with this big hen fish at 18lbs from the Tay which gave an unreal fight on the Sakura Salmon Spinning rods we had them make especially for us. 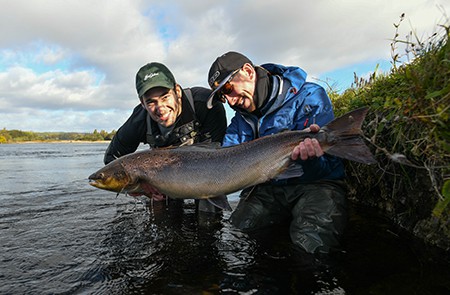 The Grayling season was another reasonably consistent one. With the fishing going in cycles it has been noted by the Tweed foundation that stocks are lower at the moment but s of 2019, rising again.

This is a common seven year cycle we experience with Grayling ageing and dying off. We have noticed lots of small 4/5 inch yearlings this winter so it bodes well for the next few years! 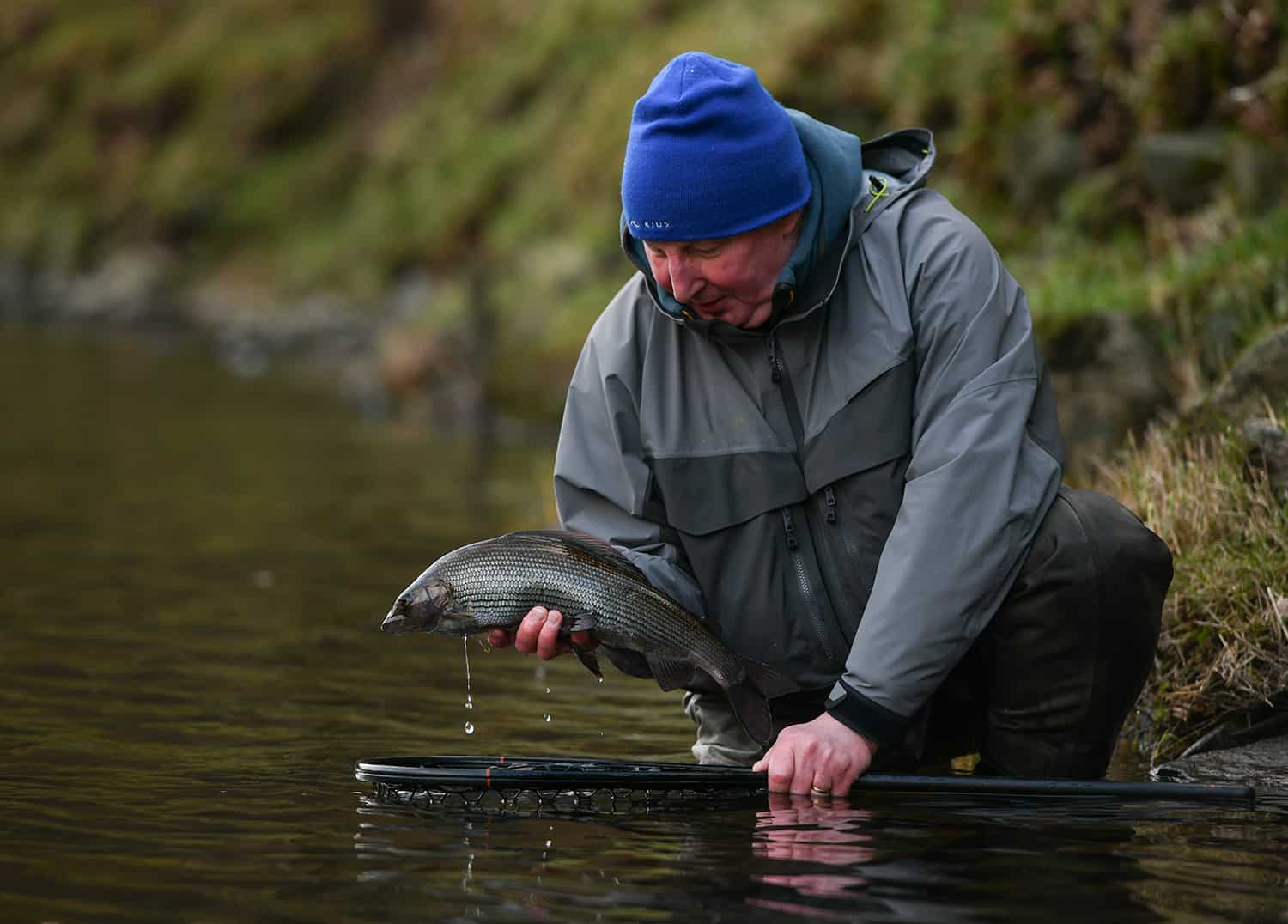 Jim’s biggest from his two days fishing – what a beauty!

Grayling still featured very regularly in our clients catches with a real mix of sizes from 10oz – 3lb mark. During the height of summer and low water they were affected and catches did understandably suffer during this period. Particularly the bigger Grayling which really do seem to sulk in the warmer conditions. The smaller fish under 1lb will still feed quite heavily.

The Autumn and winter fishing was challenging at times but our clients managed to pick away on the harder days with one or two fish. What we can say is the quality and size at the moment is some of the best I have seen with fish often 2lb class and perfect condition.

Here is Rich who fished the exact same date last year, returning his first of the last of our fish from 2018 – not a bad way to end! 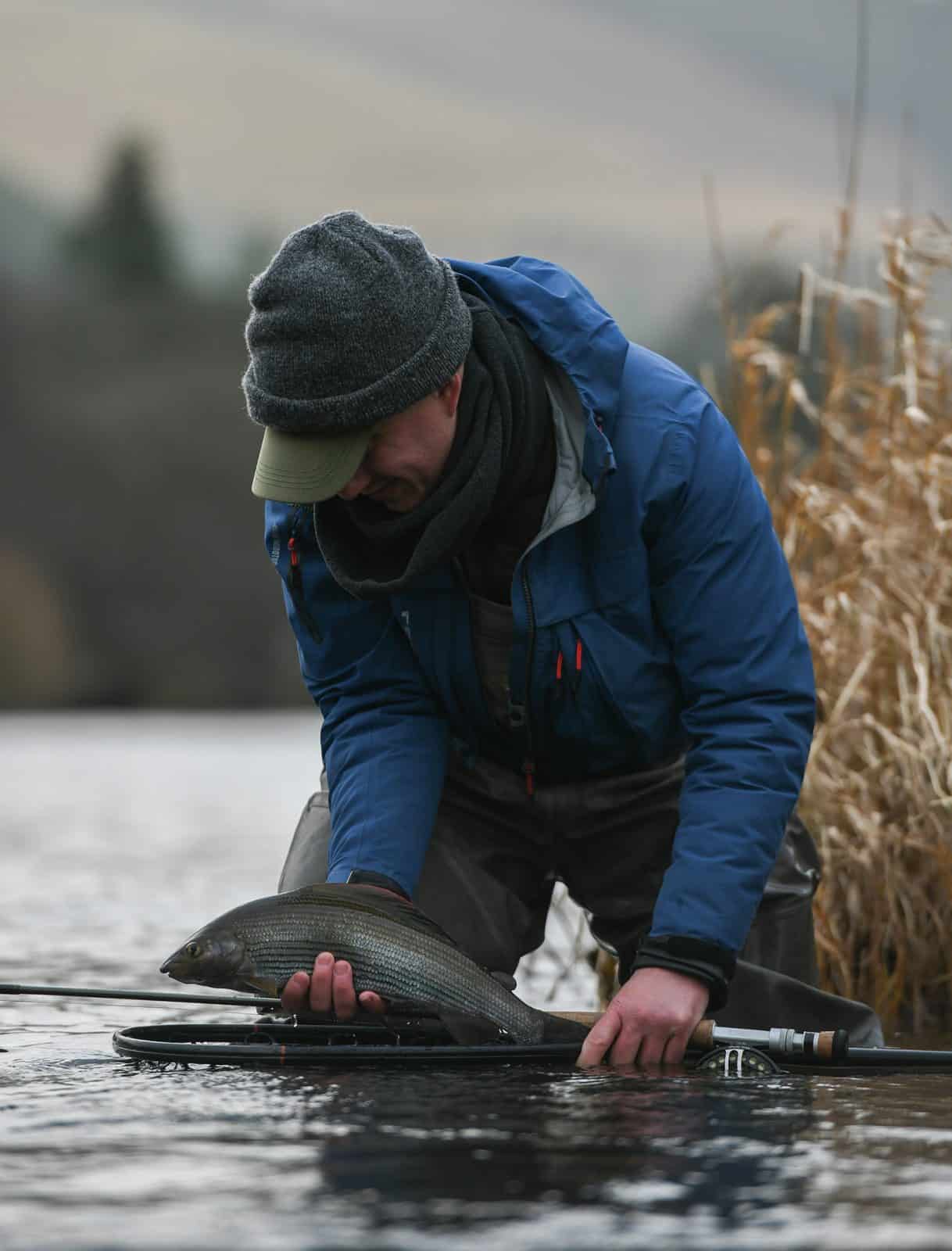 So 2018 season on a whole was a difficult but rewarding one – it is not usually as tough as this but it is challenging fishing. I think that is a fair assessment of the fishing here in Scotland. It is not easy, you have to work for the fish. However the challenge and rewards are huge with exceptional quality of fish to be had if you put the time in.

The 2019 season has got off to a flyer with the Grayling and good to see the tay and Tweed get opening day spring Salmon – I’m very optimistic a good year of fishing in 2019!