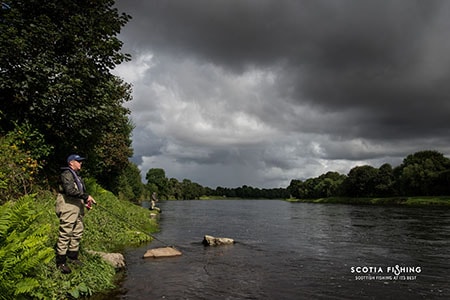 Fishing in Scotland in August can be challenging but given the right conditions can also be very productive, it all really boils down to the weather! We started August with a bang this year with our client Jim from the USA managing to land three Grilse (One Sea Winter Atlantic Salmon) on the mighty River Tay! 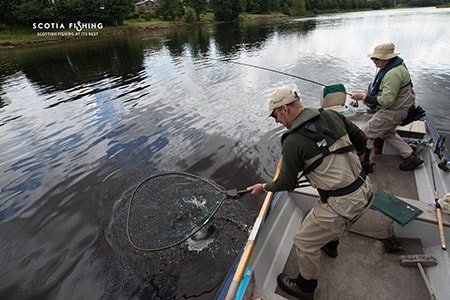 Three Salmon in one day is as good as it gets in modern times and an outstanding result at any time of year, albeit they were only small Grilse. Jim made the most of the run coming through by spinning to intercept the running fish. Big thanks to my good friend, the Tay’s finest Ghillie “Iain Kirk” for captaining the vessel! 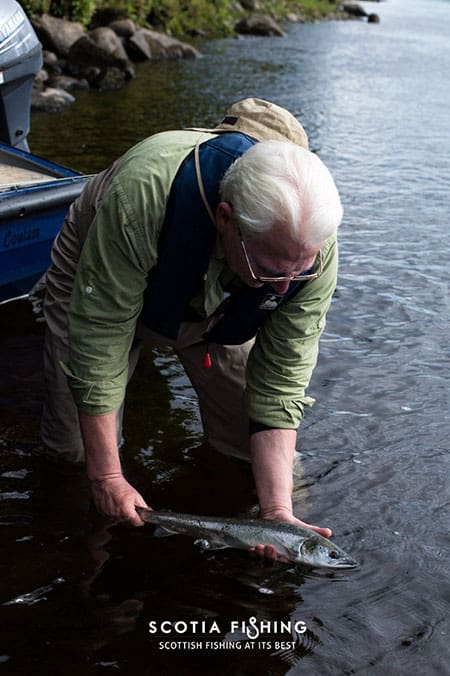 Next Salmon day we had a slight lift in water and after much deliberating I opted to take my Australian guest to the Teith. It had been low for months and after a rise of two feet and a dropping water on the Monday I expected there to be a few fish about. Considering he had never used a double handed fly rod before it didn’t take him long to get to grips with the casting, here he is performing a double spey after 30 minutes tuition from proprietor, head instructor and Loop Akademi member Callum Conner!

Lennie was looking after French guest Arnaud for a days Guided Trout Fishing near Perth. Lennie speaks French pretty fluently which was a big help as Arnaud didn’t speak much English! Lennie knows this Trout water like the back of his hands, using his experience he managed to guide Arnaud to a fantastic day’s sport landing over a dozen hard fighting Rainbow Trout mostly on buzzers 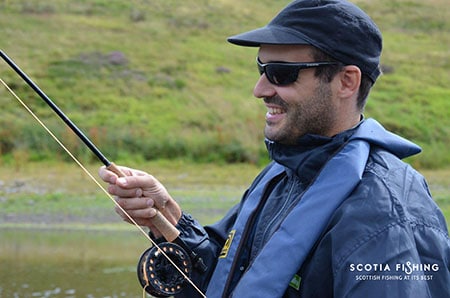 Happy clients into fish – that’s what we like to see!

A great day’s sport, Arnaud liked it so much he even wrote a blog post praising Scotia Fishing – Peche a la mouche en Ecosse!

Next up was the lovely Bilson family. They were looking to do some Trout & Pike fishing in Perthshire. We decided to split the day over two lochs in close proximity, fishing for Rainbow & Brown Trout in the morning then Perch & Pike in the afternoon. Master Bilson was the first up and caught his first fish on the fly on his first cast – literally! 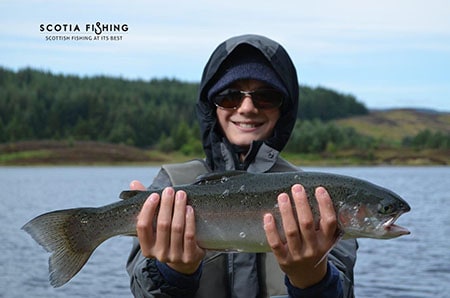 The fishing proved to be challenging after this mainly due to the bright sunshine but they missed a few more fish before stopping for lunch. After a fine lunch, freshly prepared loch side by our very own culinary expert & fishing guide “Leonardo Fullero” including wild chanterelle mushrooms and fresh smoked Trout our guests moved down to the lower Loch to fish for Jack Pike and Perch. Bliss was first up with a lovely Perch fishing the trusty old Mepps, re-rigged with single hooks to aid unhooking.  That was followed by a couple of small Jack Pike to 3lbs by George!  The family had a great day out and big thanks were relayed to our guide Lennie for giving them such a great Scottish fishing experience. 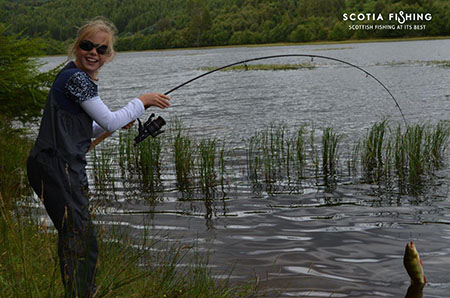 The humble Perch – arguably on of our most beautiful fresh water species!

August seemed to be a popular month for Australian’s to visit Scotland, Callum was looking after two Australian guests Salmon fishing on the River Tay. Conditions were perfect, with 2ft of extra water upon arrival, we couldn’t have asked for better! The guys fished hard all morning with only one fish showing, it was tough.

Some great light on the Tay…

In the afternoon we concentrated on fishing down the five trees into Luncarty, one of my favourite areas on Knowesbank. Ross managed a wee Brown Trout, not the intended species but always welcome! The last couple of hours we started to see a run of spanking Grilse coming through the pool but much to our frustration they were running hard and not looking at any of our offerings! The best way to end a good day’s Salmon fishing in Scotland regardless of the result is with a fine Scottish Dram! 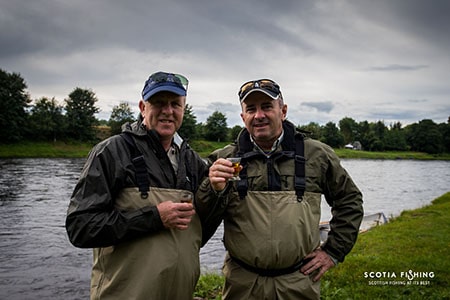 I managed to get out for a day myself on the Lower Tay with joining ghillie Harry down at Waulkmill. Fishing from the bank in the morning I took two Sea Trout in quick succession before stopping for lunch. In the afternoon we went out on the boat to cover some more water. The water was still coloured after a recent rise so we started to fish with vibrating plugs. This saw a change in results instantly with Harry losing a few fish on the trot, some very close to the boat and one that looked a bit of a pig- sickener! 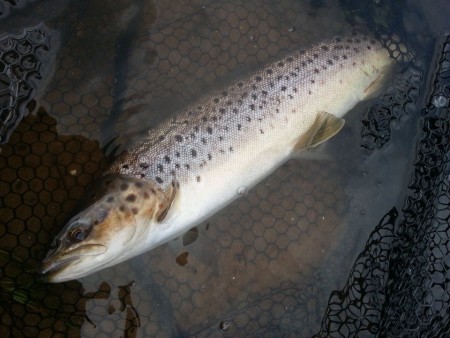 Quick snap with the mobile and away she went..

I managed another small sea trout on the Vision 110 then like Harry also started getting hits and then connecting and losing fish after playing them for 15-20 seconds – so frustrating but on the other hand good fun. It’s not often you get sport like this when Salmon fishing in Scotland, we must have lost around ten fish between us in only a few hours of fishing. Great to see so many fish running in August. 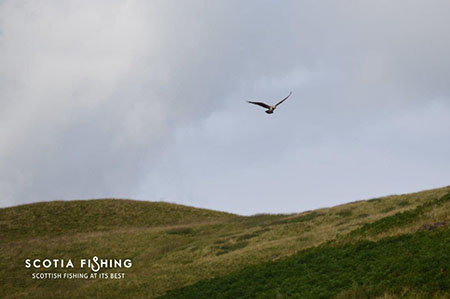 An osprey flies over head looking for lunch…

Our final Australian guest was Jarrad, a music teacher now living in England. He was up in Scotland for a few days with his partner doing some hiking and camping around Scotland. Like many anglers visiting Scotland, the Atlantic Salmon was on the bucket list! Jarrad was out for a day and this is never an easy task for us Guides but it’s a challenge we love to take on here at Scotia Fishing. Conditions were good with a slight tinge and the level dropping. We had the beat all to ourselves and Waulkmill/Goldcastle Ghillie Harry took us out on the boat in the morning to fish some of the pools easier. It didn’t take Jarrad long to connect with some chrome spinning with the Tay favourite “Toby Salmo”. 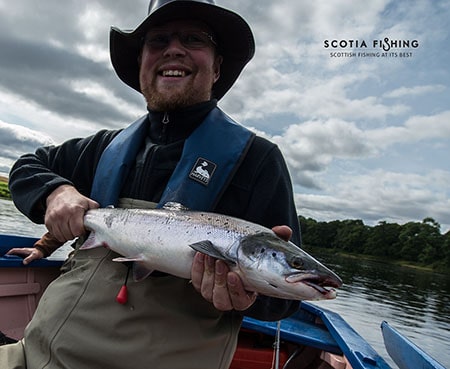 Grip it and grin!

A fine Tay Grilse in top condition and mission accomplished!

At least once a month Lennie and I try to get days fishing together to relax and go over ideas. This month saw us do a days Salmon fishing. We had low water conditions (typical of most of August) but the river had been dropping away following a recent rise so we were confident there should be some fish about. I managed to hook this coloured Sea Trout…. 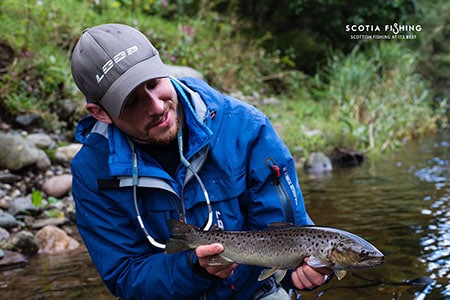 A Sea Trout that has been in fresh water for a number of weeks..

Then a lovely Grilse at last knockings… 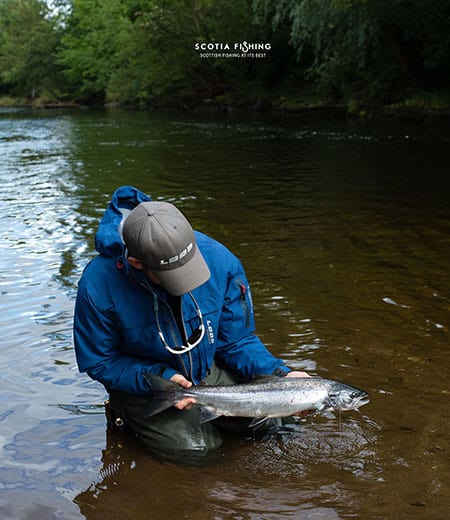 Some anglers have all the luck…

One thing that we love to see is our clients taking the time to write positive feedback from their trips with us. We’ve had some phenomenal reviews lately.  You can see some of the Scotia Fishing reviews here. 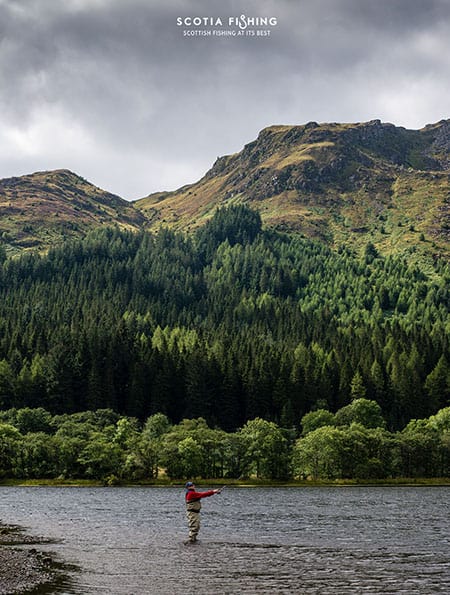 This is Scotland… Ultra-light lure fishing in style!

Big thanks this month go out to the Lower Scone Ghillies, they are top professionals, extremely helpful and a credit to the River Tay!

September is a huge month for Scotland, we have the referendum then the Ryder Cup at local luxury hotel complex Gleneagles.

We still have some availability in October so please do not hesitate to get in touch if you would like to organise guided Salmon fishing trips in Scotland during peak season!

Fly Fishing in Perth Scotland UK Fishing in Scotland in September – 2014 Round Up
Scroll to top
This website uses cookies to improve your experience. We'll assume you're ok with this, but you can opt-out if you wish using your browsers settings. ACCEPT Read More
Privacy & Cookies Policy