For those new to Salmon fishing it can be difficult to establish the difference between a fresh run Atlantic Salmon and a Kelt.

Both are often silver in appearance but there are some distinct differences when you look more closely.

Kelt is a term we use to describe a post-spawn or spawned out Atlantic Salmon. Unlike their pacific counterparts, Atlantic Salmon do not all die after spawning. 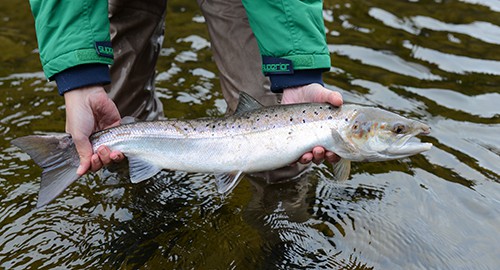 A Kelt Salmon caught in February and beginning the mending phase.

Kelts are Salmon that have entered the river the previous season/year, successfully spawned and now recovering prior to their migration back to sea.

The most obvious characteristic of a Kelt is undoubtedly their girth or depth.  Having starved since their migration from the sea, Kelts will appear very thin-like in appearance. This combined with spawning rigours can cause them to lose almost half their original body weight! 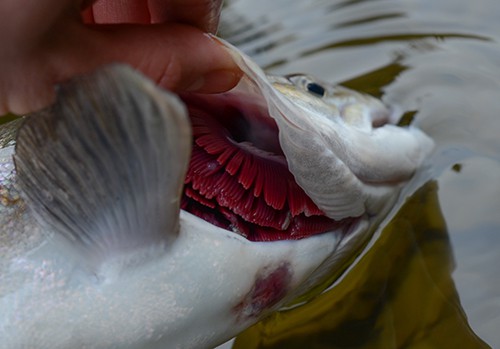 Spot the gill maggots attached to the gill filaments

An Atlantic Salmon Kelt will display signs of wear and tear after the rigours of spawning. Patches of fungus can be found and ragged or torn fins are also clear signs. When examining the gills you will often find gill maggots.

Kelts are likely to be encountered when fishing for Atlantic Salmon from January to late April.

They are easily caught and early season Salmon fishing can provide good sport with Kelts. It is important that these fish are handled with the same respect of a fresh fish as these are vital to the future of the system.

A Springer is a Spring Run Atlantic Salmon. These will enter the river anytime from January to May. 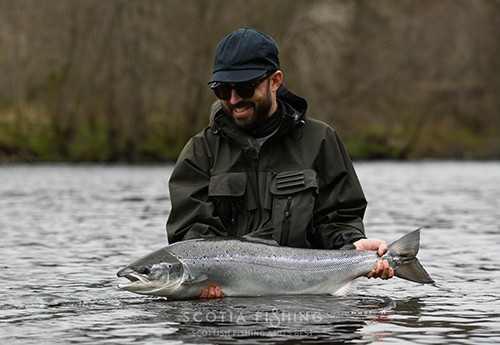 They don’t come much better than this 17lbs of chrome

Springers are multi sea winter Salmon meaning they have spent two or more winters at sea prior to their migration back to freshwater. 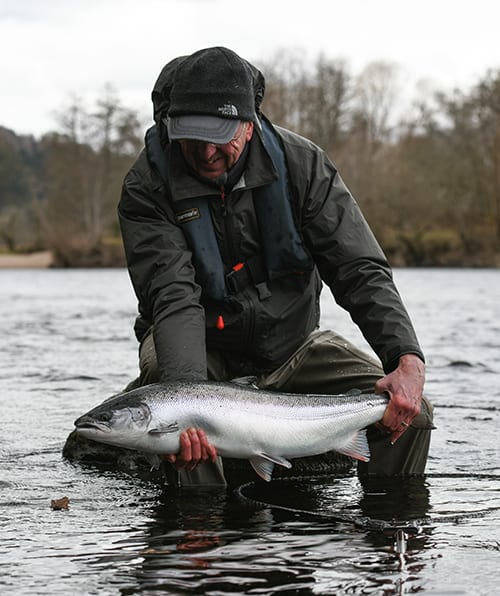 A Springer. The ultimate prize in Scottish Salmon fishing!

This is my favourite time to catch Atlantic Salmon as they are the most pristine creatures you will set your eyes on!

Baggots are a rather horrible sounding name we use to call a female Atlantic Salmon that has failed to spawn or partly spawned. This is a Salmon that has entered the river too late perhaps and wasn’t able to locate any spawning fish. 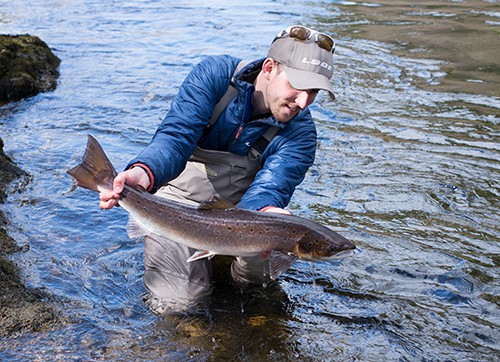 Baggots are not to dissimilar to mature coloured hens (see below).

However, Baggots can sometimes be more silver in appearance. Infact, in 2018 I caught a Salmon whilst fishing for Grayling that I was convinced was a springer. 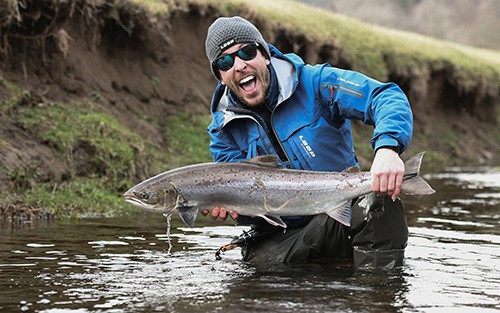 A much more silver looking baggot landed on #3 fishing for Grayling!

In a similar scenario to the above a Rawner is the name given to a male Salmon that hasn’t managed to spawn or only partially spawned, having likely entered the river too late.

A Grilse is an Atlantic Salmon that has been feeding at sea for one winter (1SW) before migrating back to spawn in the river. Grilse tend to range from 1 1/2lb – 6lbs and can be Male or Female. 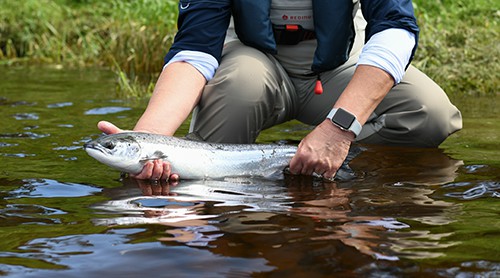 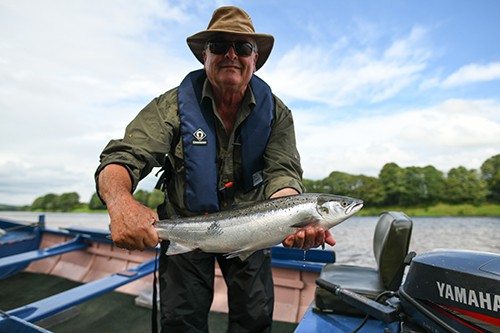 This is a term we use to describe a Salmon that has been in the river a number of weeks. 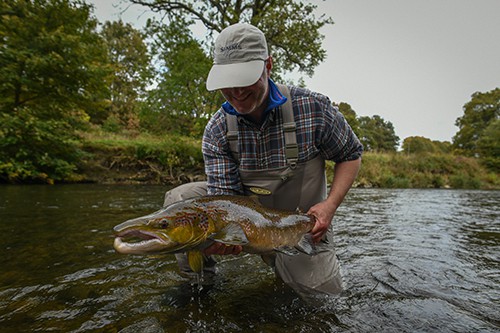 A mature cock salmon in full spawning livery that likely ran the river in spring.

When Salmon first migrate from the ocean to river they are bright silver. As they remain in freshwater they gradually lose their silver appearance.

This is mostly down to the hormonal changes in sexual maturity as they prepare to spawn. This process can take months or weeks depending on when the Salmon has entered the river. 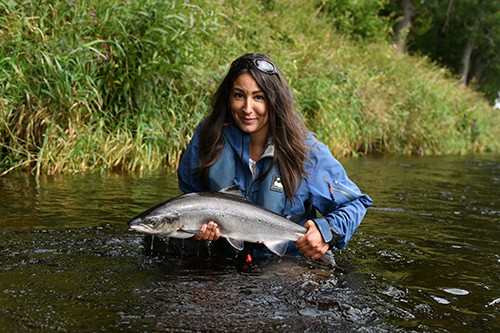 This is a back end male/cock Salmon that has been in the river a few weeks and beginning to change. Note the type taking shape and darker colouration.

From my experience, Spring run Salmon seem to hold their silver longer than a back end/later season running Salmon.

Sexual dimorphism allows us to easily identify the difference between male and female Atlantic Salmon.

Male Atlantic Salmon go through a massive change in appearance. The skull changes, most notably the lower Jaw formation as it develops a “Kype” (hook at tip of lower jaw) and grows a new set of “breeding teeth” to help compete against other male Salmon. 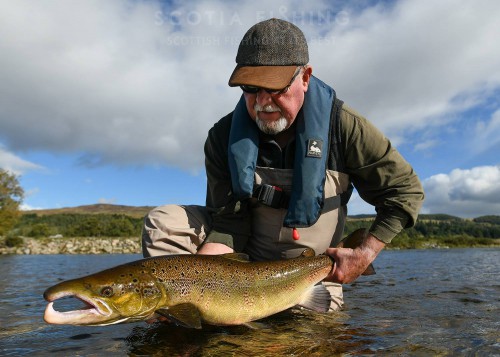 No mistaking this is a male/cock Salmon! 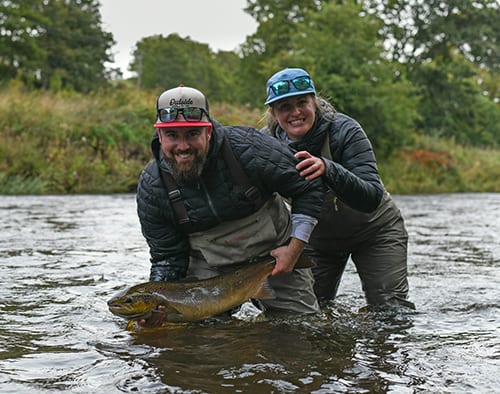 In opposite to the male the females belly will distend as she develops her eggs. The skull formation does alter, but no kype is evident. Later on in the process the vent will begin to open in preparation to lay her eggs . 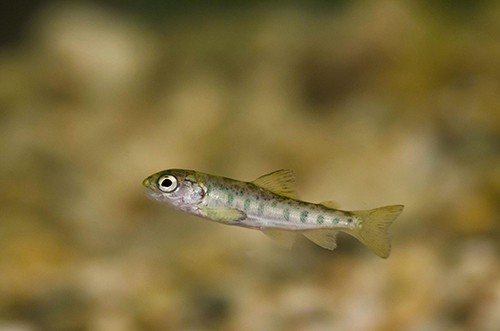 A parr is a juvenile Salmon. Salmon Parr are very similar to a Trout Parr.

A Smolt is a juvenile Salmon ready to begin its migration to sea. Similar to the above parr it will now start to turn silver as layer of Guanine crystals is laid down in the skin.

This is protection in preparation for the Saltwater environment. Smolts typically migrate to sea from March to May and will often be caught accidentally when fishing for Trout.

I hope this article educates you on the fascinating phases of the Atlantic Salmon’s life cycle.

If you’re looking for Salmon fishing in Scotland please check out our packages in the highlighted text or here.

2019 Fishing in Scotland Season Review Fly Fishing for Golden Dorado South America – Golden Dorado Fly Fishing...
Scroll to top
This website uses cookies to improve your experience. We'll assume you're ok with this, but you can opt-out if you wish using your browsers settings. ACCEPT Read More
Privacy & Cookies Policy