Great to see our client Adam in this months Trout & Salmon magazine, Salmon fishing on the beautiful River Teith! Adam never managed a Salmon on this day but took up Spey casting very quickly after some tuition from Founder, SGAIC and Loop Ambassador Callum Conner! 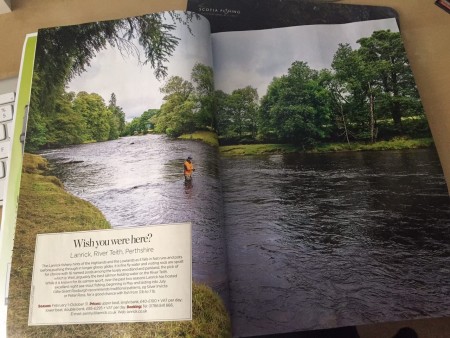 Trout & Salmon is the UK’s number one, leading game fishing monthly magazine, an institution in fly fishing literature so it was great privilege to be asked to provide this image for the current issue.

One thing we take the great pride on is the images on our site are taken and copyright owned by Callum Conner Photography bar a couple of himself.

Fishing has been excellent this past few weeks and you can look forward to a write up very shortly!

The fishing in March & April in Scotland 2015 for Scotia Fishing clients has been particularly productive despite the cold temperatures, let us share with you a few highlights. March was mostly cold with spell of rain to keep the rivers at a good height, but the Salmon just didn’t arrive in numbers and if truth be told, the start of the season was very slow throughout Scotland. The Tay continues to be Scotland’s number one river at present with consistent catches throughout March and April.

In April we saw hotter than average temperatures but it was mostly dry and cold the remainder of the month which did effect the Salmon fishing, especially towards the latter part. We also had snow and lots of hailstones – proper Scottish spring weather!

Unfortunately Ron got washed off the river and we headed to fish a Loch as a backup. The weather was typically early spring like and we endured a rather bizarre few hours of fishing. 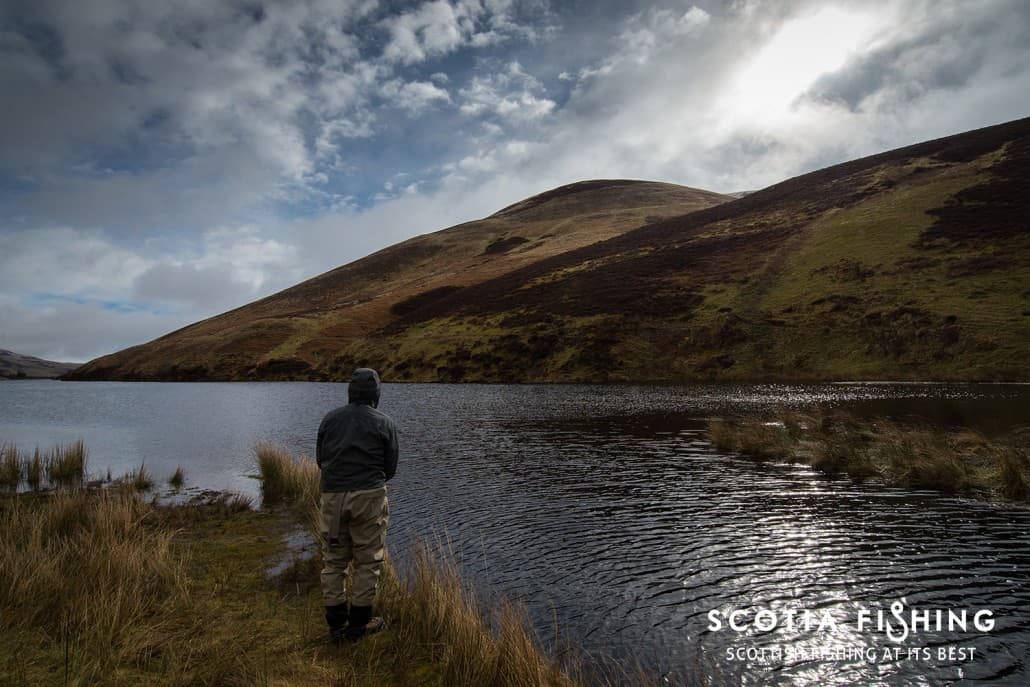 Not a bad day… 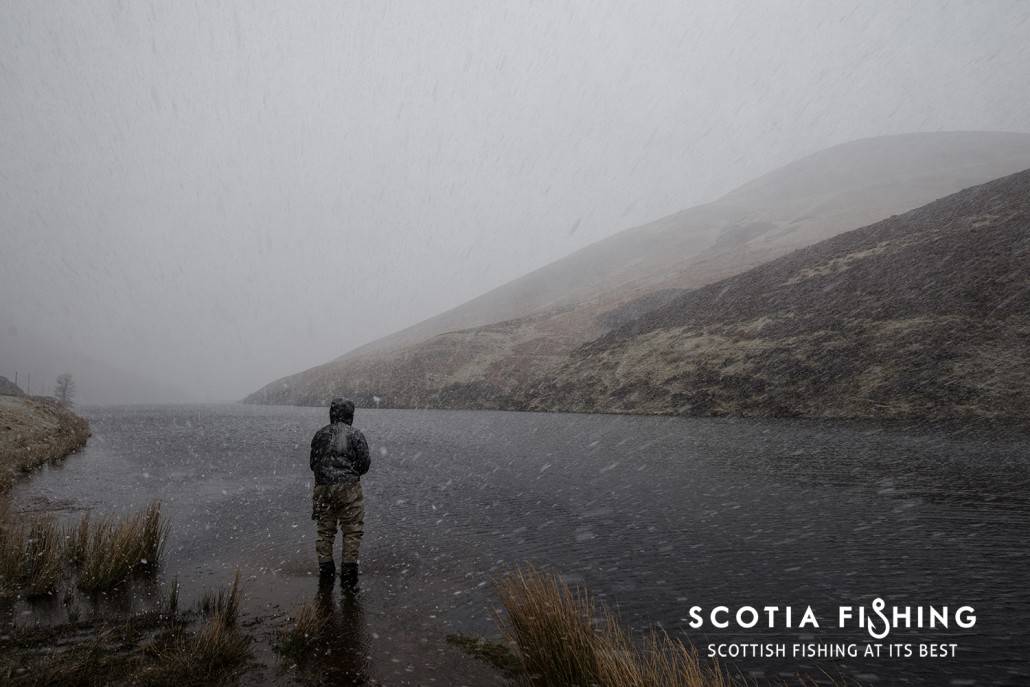 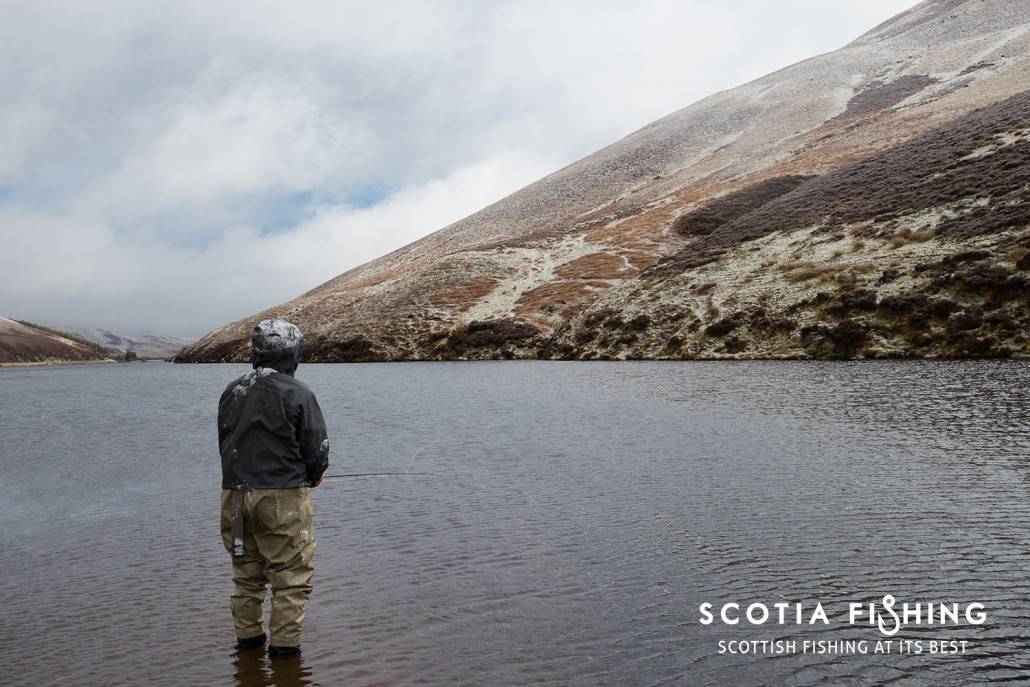 And sun, this would repeat itself over the next hour before we decided to opt for shelter

73 year old Ron from USA was a remarkable man, he told me a rather touching story of why he is still working at 73 and I instantly admired his attitude and drive. Due to the horrendous weather we had to move Ron’s day to try avoid the bad weather and managed to get a day Salmon fishing on the Tweed.

Ron had never cast a spey rod before and took to it impressively, within an hour he was throwing some lovely loops like this!

There has been a rather cold wind lingering around most of the March & April which has halted back the fly hatches and it has seen sporadic surface activity on the rivers. This is usually the best time of year to catch big trout feeding on early season hatches of Large Dark Olives and March Browns. When they’ve been on it has been very worthwhile with special Trout like this one pictured below making an appearance. 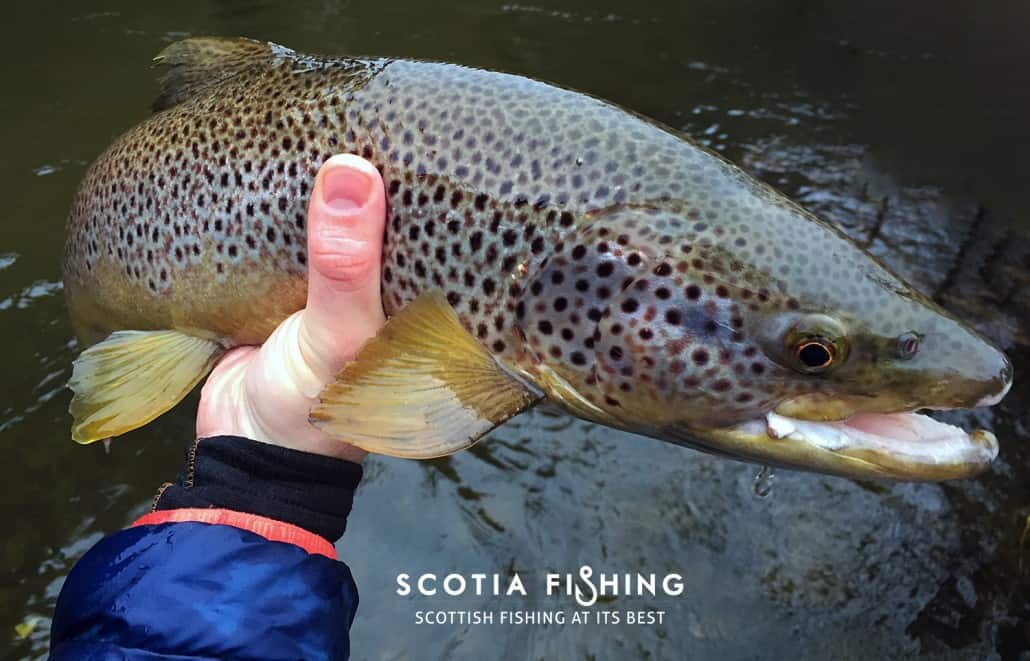 Our clients had some great days fishing for Trout & Grayling throughout March & April. American singer & songwriter Chuck Ragan managed to fit in a short day session in between his busy european tour and was rewarded with a few grayling and trout on the River Tay. 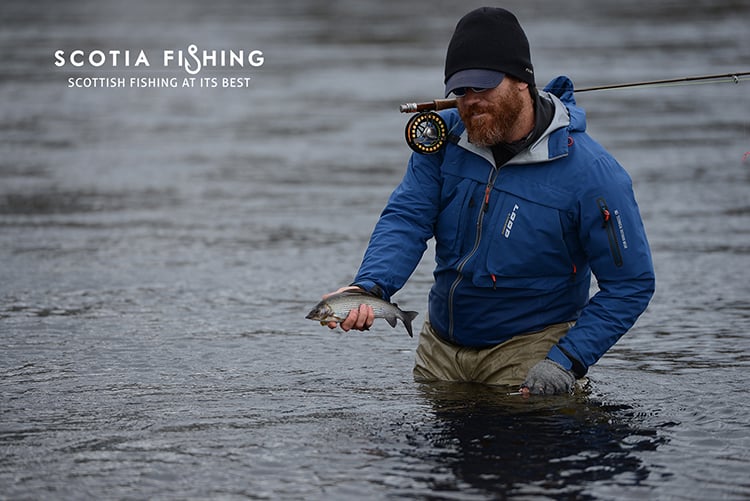 Chuck Ragan with his first ever Grayling

Tattoo Artist Ed from New York managed an awesome treble of Grayling over 2 pounds including this one which was pick of the bunch! 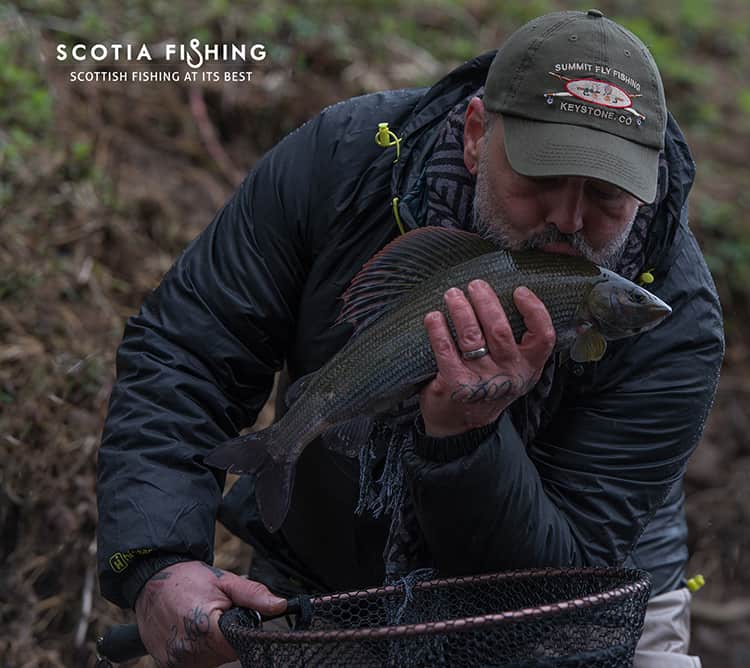 Show the ladies some love… 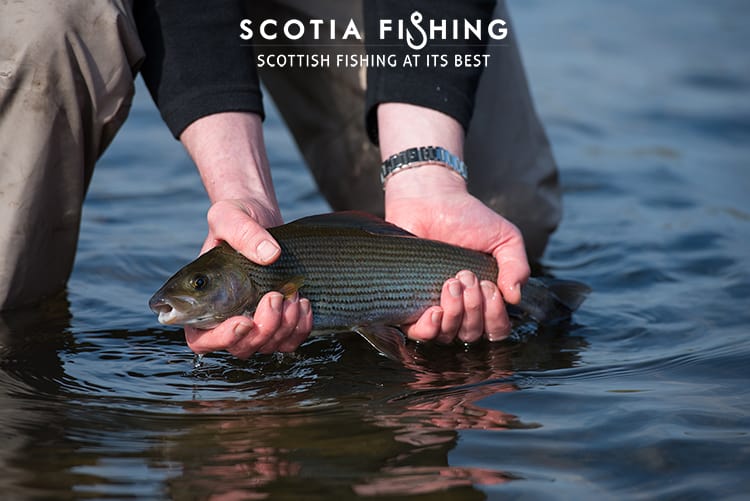 The wildlife on the river banks in Scotland is impressive, with many beautiful birds, otters, minks and now beavers in the Tay system. On Tom’s river day we had Deer roaming along the opposite bank whilst fishing for Trout, making for a special atmosphere. Birthday boy Tom managed 2 great fish over his days with us, including an absolutely stunning example of a river brown trout that had the most awesome blue markings down it’s flanks. 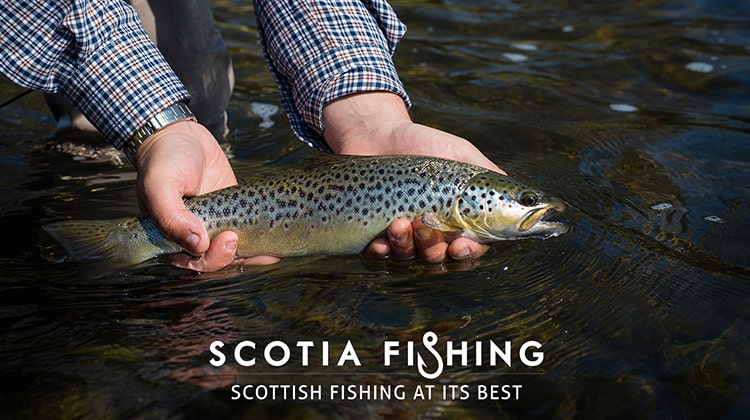 Tom also managed this nice Pike on the final day of his trip to seal of a memorable fishing holiday in Scotland. 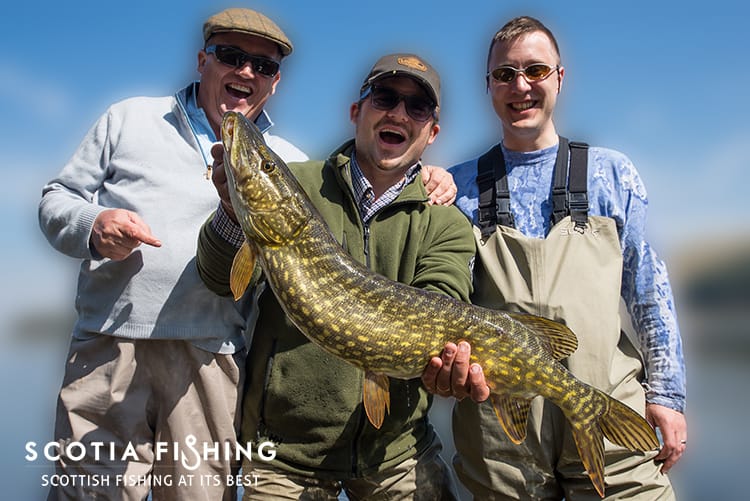 I had a ball with Mr Garrity from the USA who was an ex guide and a good joker. He spent a few days in Scotland fishing for Salmon and Trout with us. The Trout fishing during his time was particularly tough but this fine example of a River Tay Spring Salmon certainly made up for the lack of Trout! 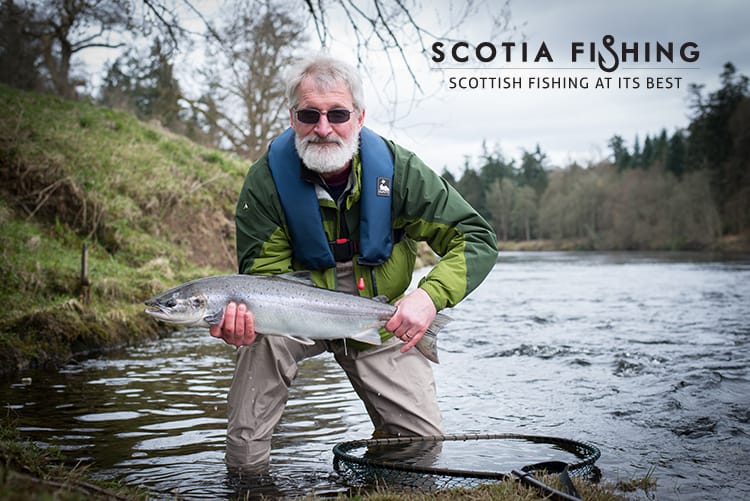 When the fishing is tough in Scotland, it’s not a bad place to spend the day is it? 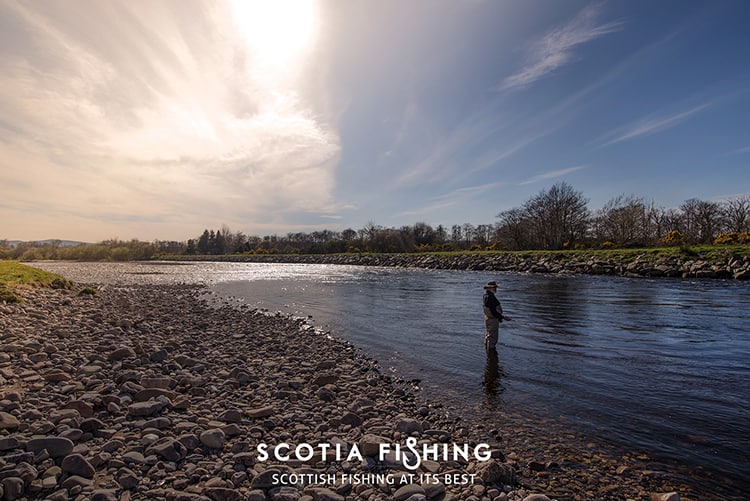 I even managed to get out fishing myself and fished up on the spectacular River Dee managing a baggot (last year running salmon that hasn’t spawned) under the guidance of good friend of mine and resident ghillie Al Peake. It fought very well and we both were surprised after it surfaced to notice it couldn’t be counted. 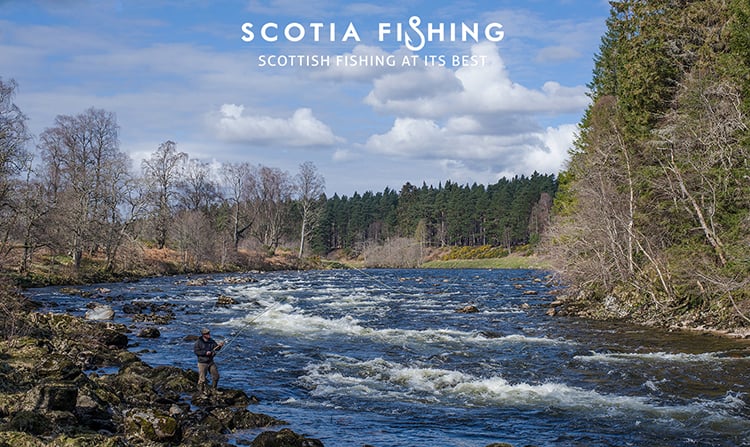 Al throws a nice line at the neck of the pool where I caught my baggot! 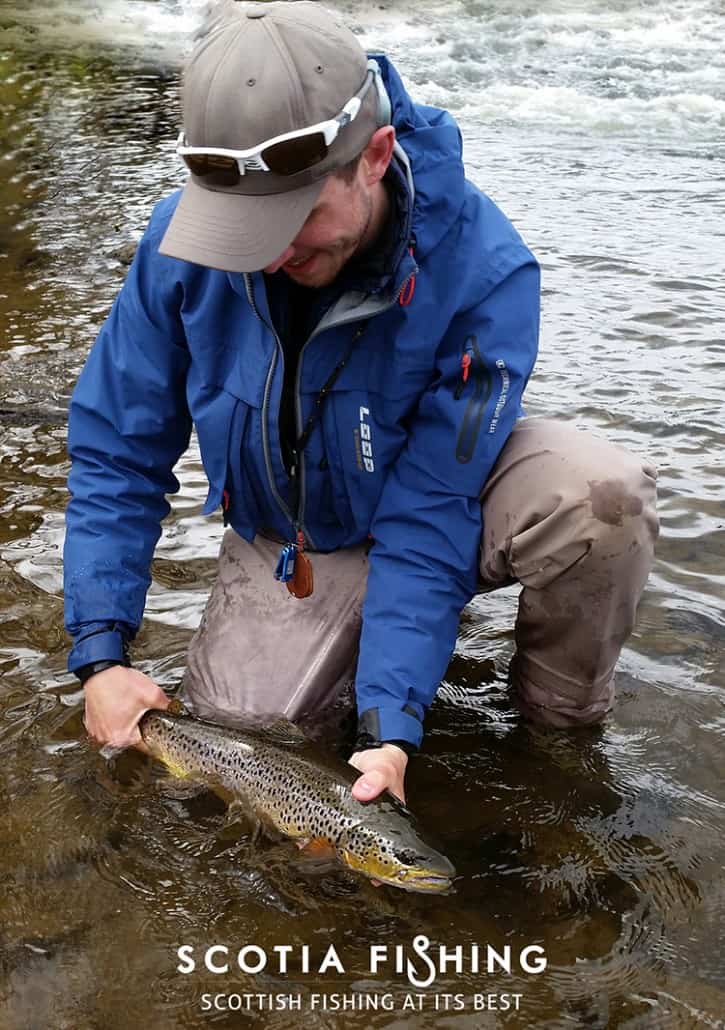 Then eventually I got my own Salmon account off and running also with this fine example of a Tay Spring Salmon,  nice deep fish and a solid fighter. 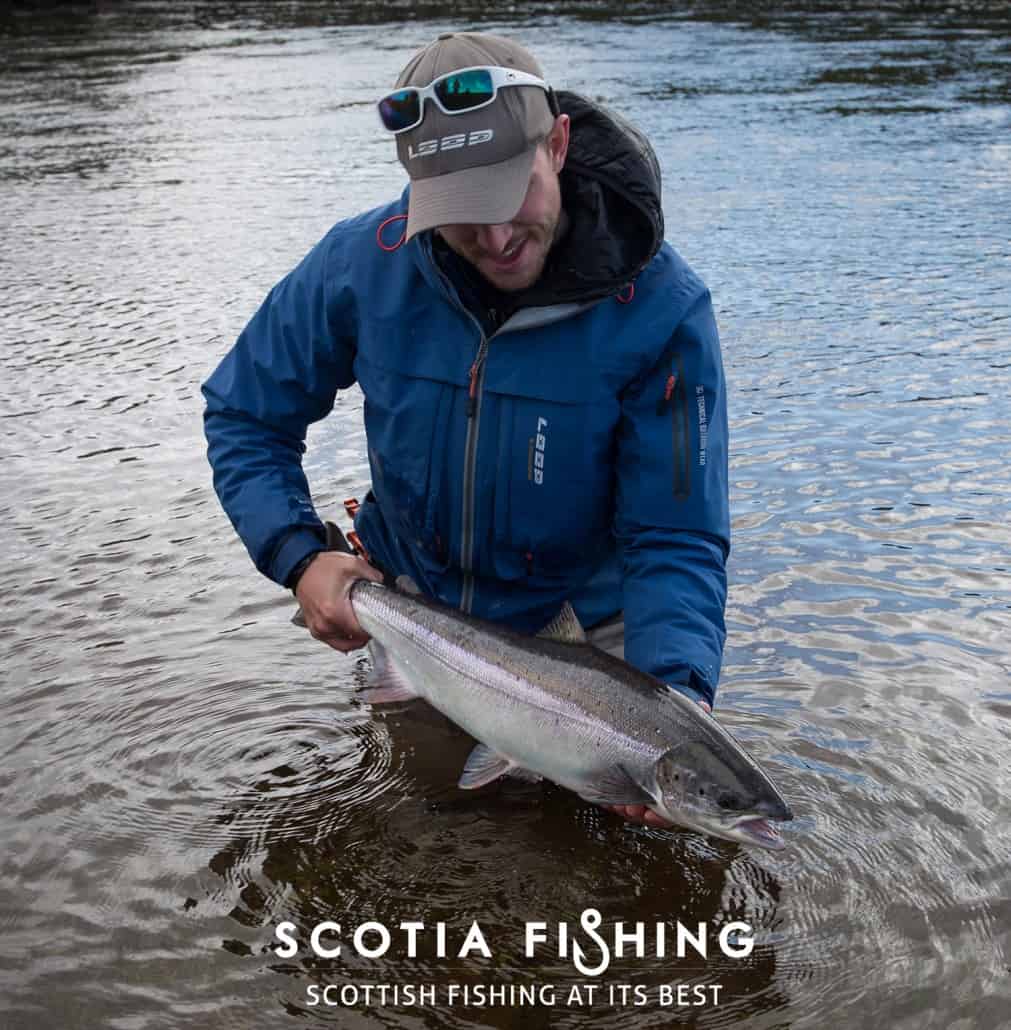 A fine example of the calibre of Spring Salmon the Tay can produce!

May is one of the best months of the year for fishing across all Scottish species, the water temperatures are on the rise, the pike and grayling have now spawned, the salmon are running hard and the trees are starting to look more green every day, everything is coming into it’s own. We can’t wait to get amongst the fish with this months clients!

If you are looking to book a fishing trip please get in touch using the contact buttons at the top and bottom of each page.