Wow where has this season gone! It’s mid September and I am getting a small break in between moving homes to write a little update/report on the fishing!

Spring this year was a strange affair. April became the driest April on record for Edinburgh. This had an effect on the river fishing, undoubtedly.
We endured a tough period of fishing throughout April and May with temperatures reaching 27 degrees celsius up on the river banks some days. Such periods of heat and low water do make for tricky fishing, particularly with Salmon. 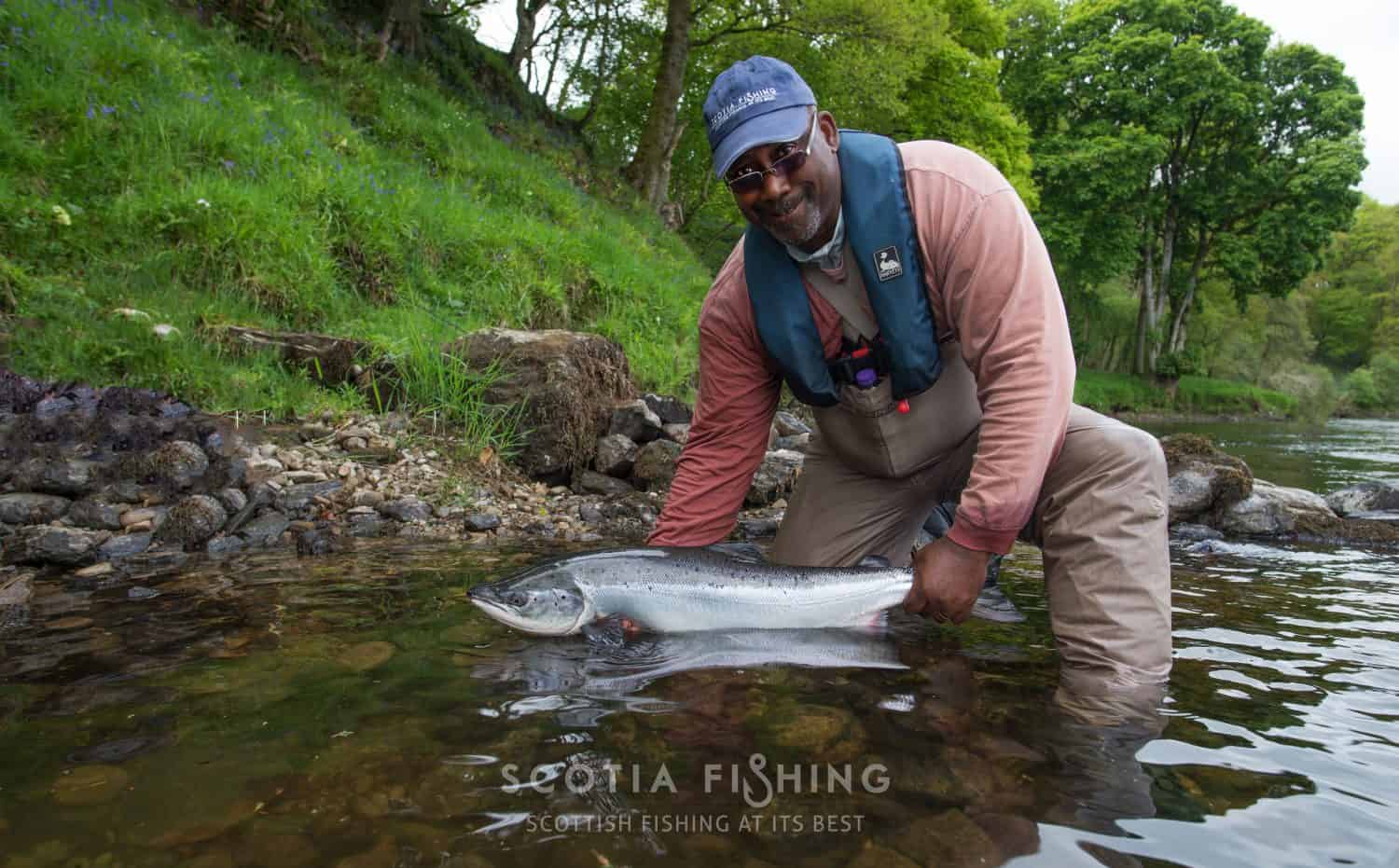 Worth falling in for mid-fight.

However, there were a few still getting caught and our guest above Will from California done well to land this beauty after falling in mid-fight! Don’t expect any sympathy from the guides until the Salmon is landed folks! 🙂

The Trout fishing for us was a challenge in Spring but did improve into the summer. We did manage a few nice ones but none of the real big Trout we often encounter at this time of year on the dry fly.

Erin had a blast with trout on the Tweed system!

Before and after the Grayling spawned saw some great sport but there were some tough times in the low water conditions. Stealthy anglers were rewarded with fish up to 2 1/2lbs. 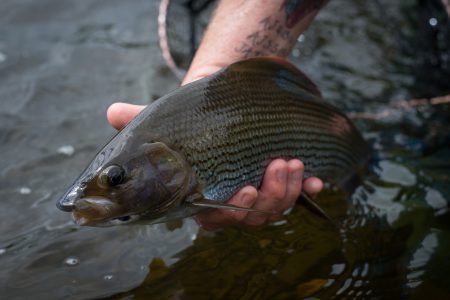 The Pike fishing was pretty reliable in spring. It did take a while to get warmed up at the Pike loch before they really switched on ! 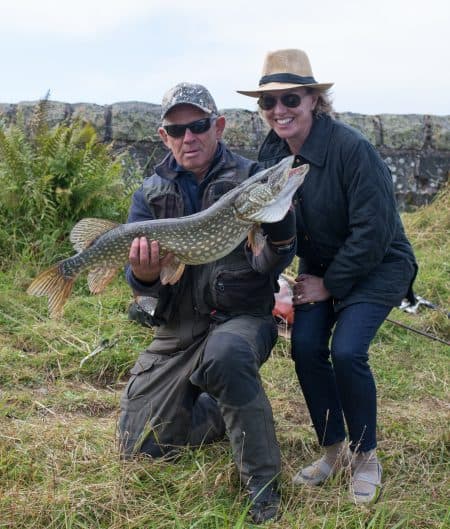 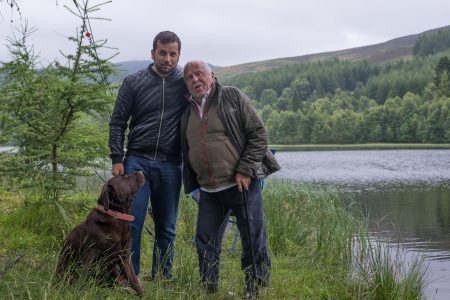 As we moved into summer the rains came and the temperatures dropped in typical Scottish summer fashion! This done wonders for the fishing and we endured some of the best fishing of the year so far in July/August.

Ian managed this proper Tay Salmon after losing one earlier on the fly. A quick change of tactics resulted in this fine specimen. 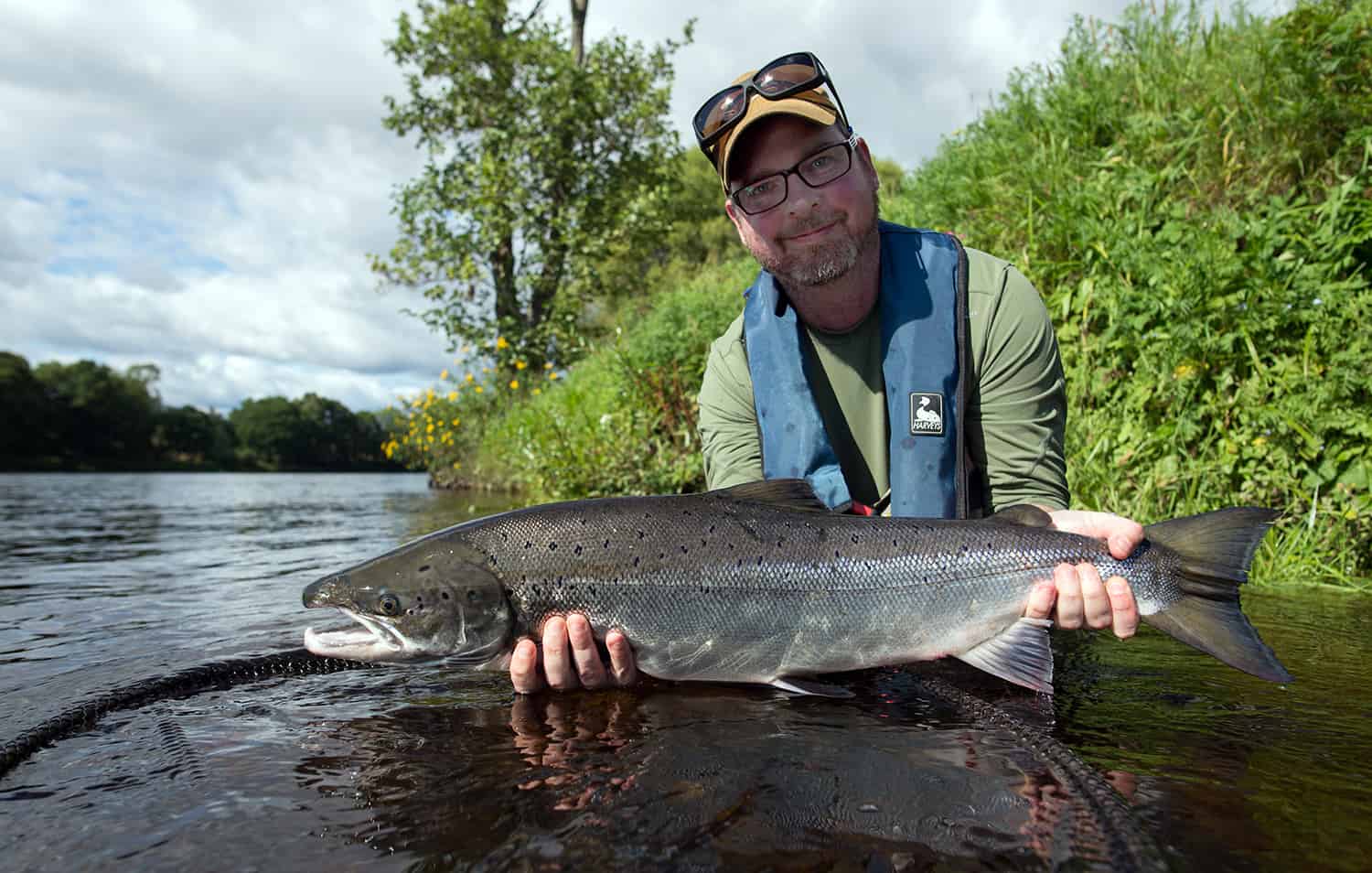 Ian’s second Salmon on his second day of fishing. He lost one shortly before on the fly also!

Dave from Cape Cod managed a nice fresh Grilse on the fly during two days of fishing on the River Tay. 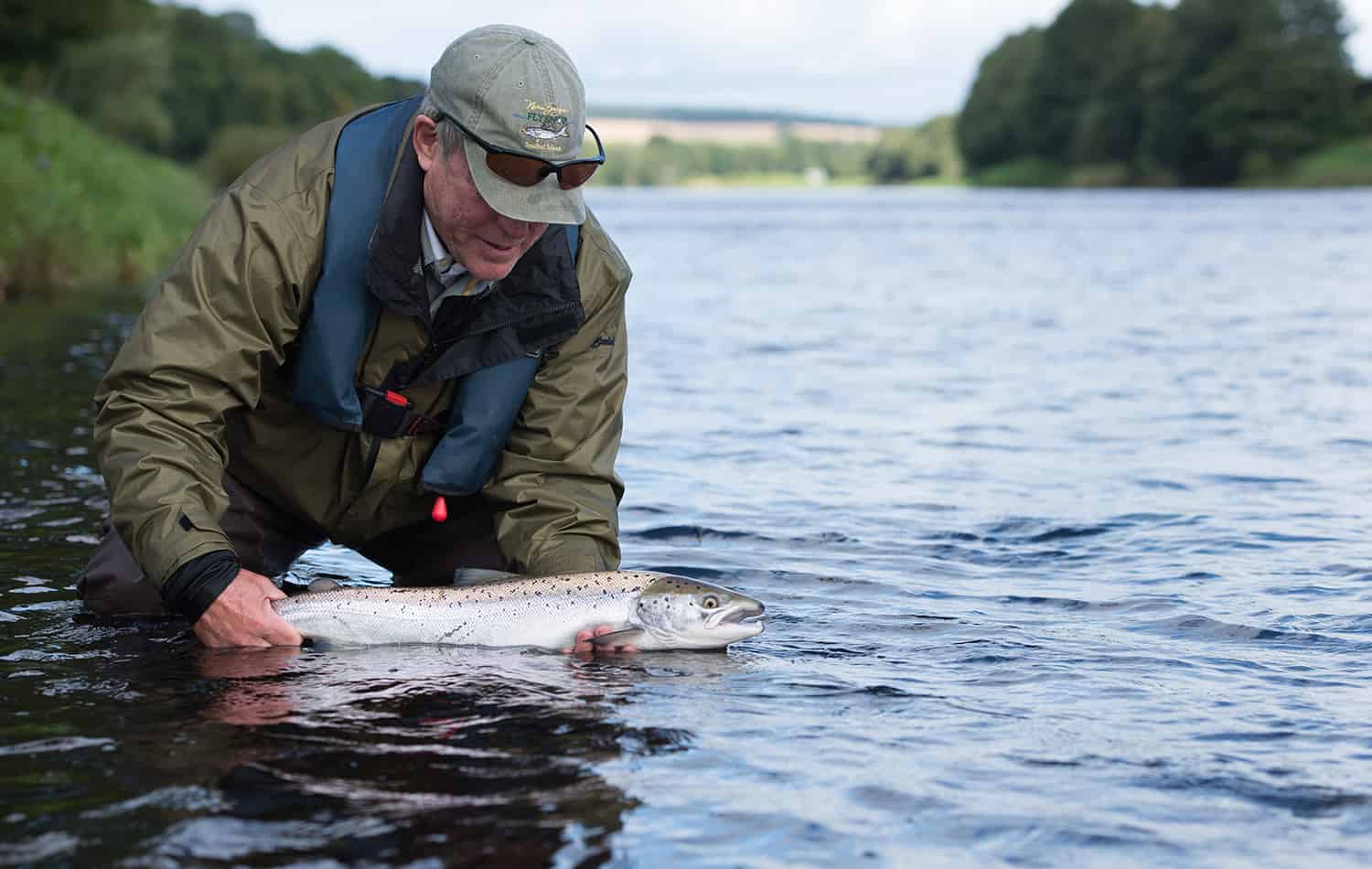 Also worth noting was the Sea Trout fishing in early summer. Alexis had this little spanker from the Tay on the fly when fishing for Salmon. 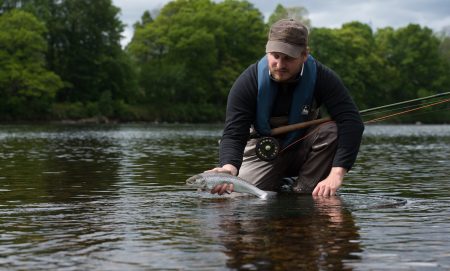 The Grayling really switched on in the bigger waters and we had some really good fish on the nymphs not shy of the 3lbs mark. 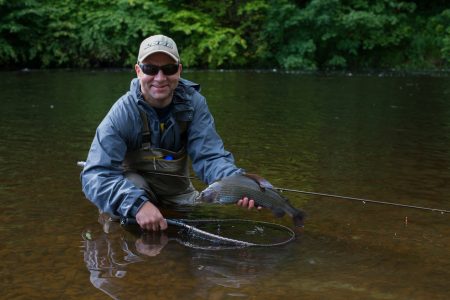 Medwin displays a rather thick Grayling!

With high river conditions we brought out the streamers for the Trout and I saw a few fish well over 2lbs lost by clients during this period. A real sickener but that’s fishing! There were a few nice ones though including Mr Shintani from Canada below. 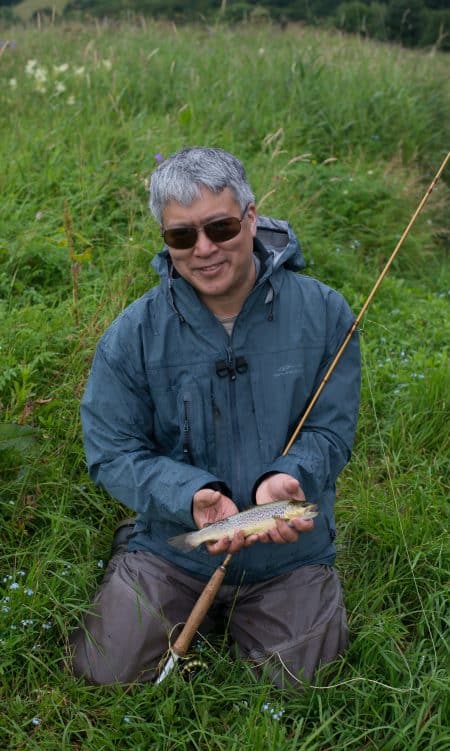 Nice trout for Eric on the streamer!

The Pike fly and lure fishing was pretty good when we had settled weather conditions and some nice fish came to both methods. Pick of a bunch would be Jeff’s pictured below. He fished away solidly all day with nothing until the last ten minutes. Landing a 8lber closely followed by this 17lber and an awesome fight! 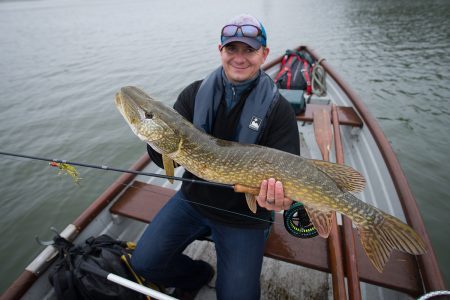 Pike are just awesome on a fly rod!

I even managed to sneak in three days of fishing myself up in the Highlands and managed a Salmon each day. 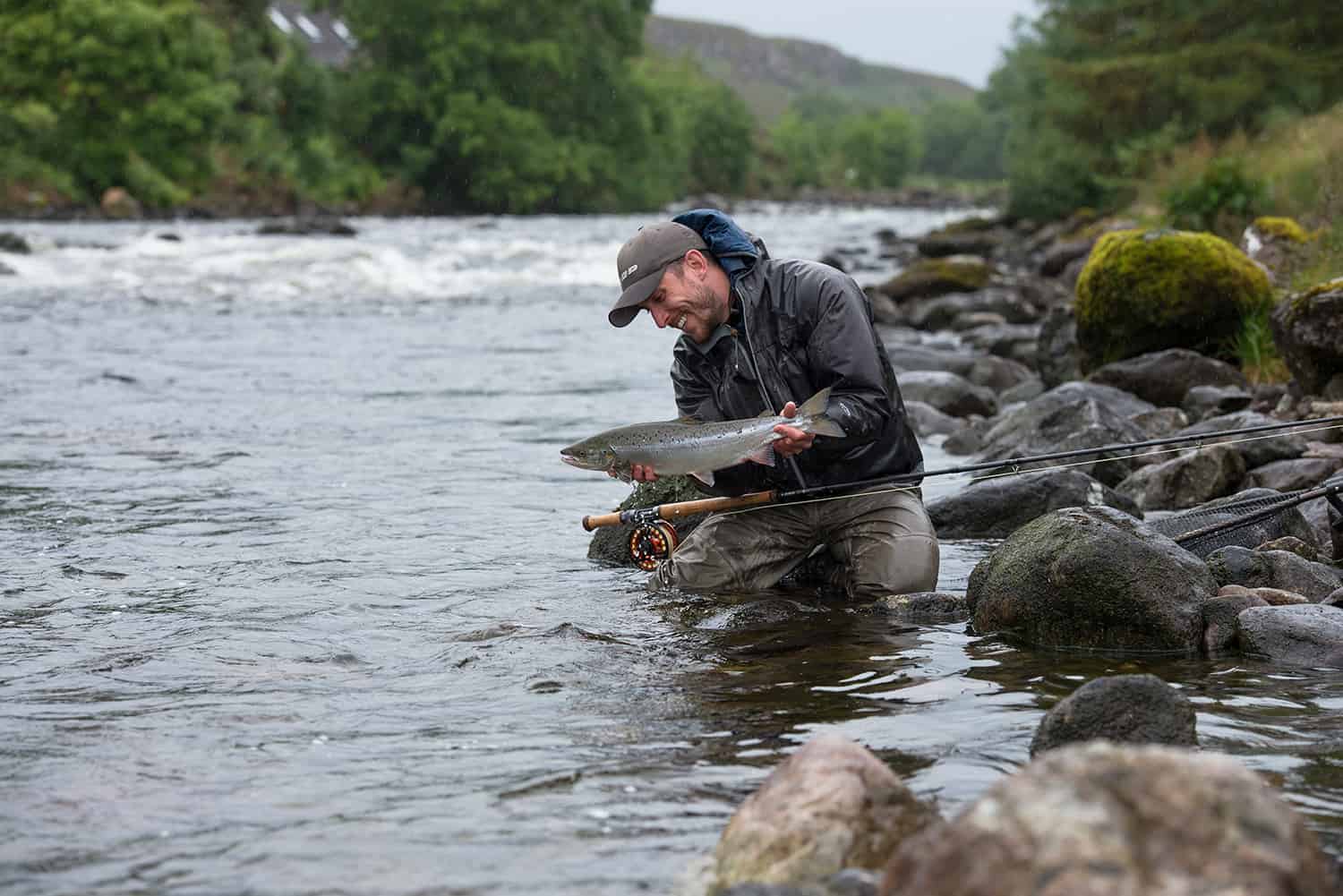 Sometimes I get to fish too!

The fish of the trip however was my friends first ever Salmon, what a way to start your Salmon career with a 9.5lbs sea-liced bar of silver. They don’t come much more perfect than that!

Ewe Beauty – My First Salmon from Scotia Fishing on Vimeo.

It feels very Autumnal now here in Scotland and the river banks are looking splendid as the leaves turn. This is a truly special time to fish in Scotland – cannot wait to update you on the rest of our season in the coming weeks!